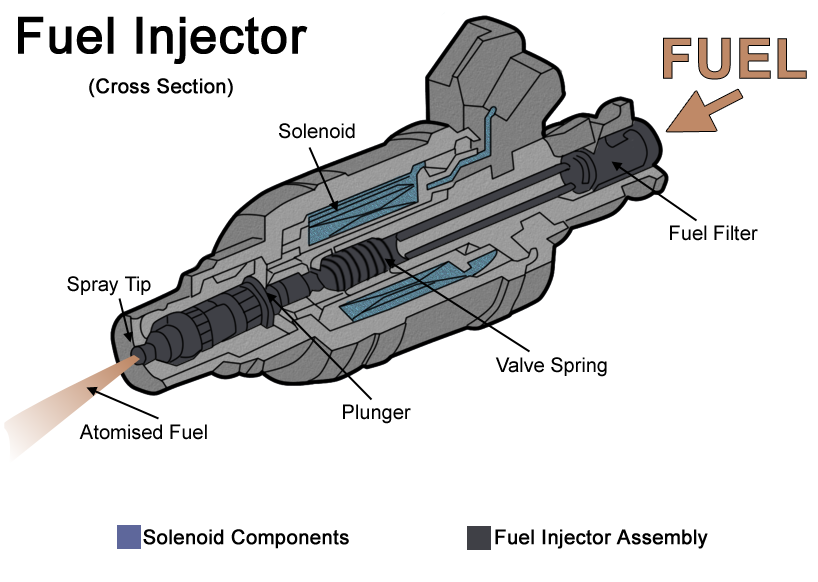 To anyone who’s not an automotive expert or doesn’t have a degree in engineering, certain technical concepts surrounding cars might seem daunting. One such concept is what we’ll be tackling today- Fuel Injection Systems. For an easy understanding of how different engines use and consume fuel in their systems, we’ve put together this handy guide to help get familiar with all the types of fuel injection systems that exist.

We know, engines require fuel and oxygen to operate efficiently but simply introducing gasoline in the engine doesn’t help with an ideal ratio of air that is required to burn the fuel completely. Engines actually need a perfect ratio of 15:1, which means for every one unit of gas, 15 equivalent units of oxygen are needed to achieve proper combustion. This perfectly balanced mixture is also referred to as the stoichiometric air-fuel ratio. Fuel injection systems are designed to deliver this mixture to the cylinder for an effective combustion process while also helping to produce the least amount of dirt from the exhaust as possible.

What Is A Fuel Injection System

Let’s delve a little deeper to understand what fuel injectors do. Since the very beginning of combustion engines, we have searched for an efficient way of introducing air and fuel into the cylinders to get the maximum mechanical output. Fuel injectors came as a viable option as early as the late 1800s but their complexity rendered them a quixotic venture at the time. It was only around the late 1970s when the concern for the environment rose and the need for something better than the carburetor became paramount did the fuel Injections really came into play.

Fuel injection systems are not only used for the introduction of fuel in the engine but ensure a consistent stream of the liquid across all cylinders, preventing irregularities in the distribution of fuel and inconsistent power delivery. A fuel injection system ideally is expected to be able to precisely calculate the amount of fuel and oxygen under any condition in the engine compartment that is hot and cold. This includes perfect fuel-to-air ratios, efficient dispersion as well as lowered exhaust emissions for smooth vehicle operation under any temperature. However, a perfect system that is capable of performing all of the above unassisted does not exist. All Fuel Injection systems are composed of three main components- Fuel Injector, Fuel distributor, and Fuel pump. The first used for creating adequate injection pressure, the second for assessing the amount of fuel, and the third for the final injection.

Fuel Injection systems in the early days made use of injection valves in conjunction with a helix-controlled injection that both measured fuel and the right injection pressure. However, significant progress in the field of microelectronics allowed the systems to significantly improve their accuracy and efficiency of monitoring fuel supply. Today, the job of assessing fuel and injection valve actuation done by the ECU- engine control unit cutting down the fuel injectors work to only provide an injection pressure.

The single Point Injection system was the first extensively used solution for fuel injection that was tasked to replace the carburetor. It had a single or in some places two nozzles in the throttle body. Throttle body injection as opposed to the carburetor used a single injector to mix fuel with the air and pump it through the inlet port continuously while the car is in motion. It was new and efficient at the time, though, primitive with respect to the potential of fuel injection systems. Nonetheless throttle body injection system was the much-needed carburetor alternative that laid the groundwork for more complex multipoint systems. In fact, it was the breakthrough that enabled automakers to comply with the exhaust emissions regulations with relative ease as a number of components from the carburetor such as the air cleaner, fuel line routing, and intake manifold were usable with little to no change, delivering a low-cost solution with easy ignition, smooth drivability, and simultaneous reduction in emissions.

Originally designed for airplanes the multipoint fuel injection system was a step further from the throttle body system that gained prominence in the passenger car market. As its name suggests multi-point fuel injection used multiple ports for fuel dispersion. Located outside the intake port, it contained injection points for each cylinder valve to pump fuel and as each of these cylinders are in close proximity to each other, the temperatures around them reached a significant high. Through this heated condition air swirls in the intake were produced also helping in the formation of the air-fuel mixture. Further, this reduced the amount of fuel atomization which allows a relatively low injection pressure to be sufficient for each injection point in the engine. One of the many benefits of this type of fuel injection system was increased power generation due to near accurate fuel-to-air ratios.

Though being able to achieve more power while simultaneously cutting emissions, the MPFI had one minor shortcoming. It lacked time optimization for pumping fuel individually to each valve and resorted to spraying in groups. To circumvent this problem, the sequential injection system was introduced and therefore is also known as the timed injection system. This was a crucial improvement as it helped minimize fuel wastage in the compartment. The SFI was mostly an improvement on the multipoint iteration of the injection systems which offered less waste with higher operating efficiency for the vehicles.

This is the most common fuel injection system that you’ll see being used in diesel engine vehicles. Direct injection is as efficient as microelectronics will allow the fuel injectors to be while keeping the complexity minimal. It injects fuel directly into the combustion chambers making it an ideal injection system for performance cars. Though its simplicity and nuances seemingly solve a lot of injection problems, it does come with its own share of drawbacks. The two most common downsides to the direct injection system are associated with its aggressive carbon build-up in the intake ports and finely atomized fuel that causes lowered performance until the right temperatures are reached in the compartment.

Indirect injection is the type of internal mixture formation system wherein an internal combustion engine is not injected fuel directly. In an engine designed for indirect injection, there are typically two combustion chambers- One main chamber and an additionally connected pre-chamber also called anti-chamber. The fuel is only pumped into the specially designed pre-chamber which adequately mixes the atomized fuel and begins the combustion process in the main chamber. Certain car manufacturers chose to utilize indirect fuel injection as a combination with the direct injection system called the dual injection system. It employed the merits of both direct and indirect fuel injection. The direct system allows an accurate ratio metered into the combustion chamber providing increased efficiency and mechanical power generated. Complementing this the indirect system keeps fuel introduction steady on the ports, reducing the accrual of carbon and providing a better fuel mixture ratio. Due to the sophistication of this system, it is mostly used in flagship models.

Though you can find some fuel injectors online claiming to be universal, you cannot use one removed from another car or an old one. Fuel injectors vary based on the type of injection system in use while also differing in size.