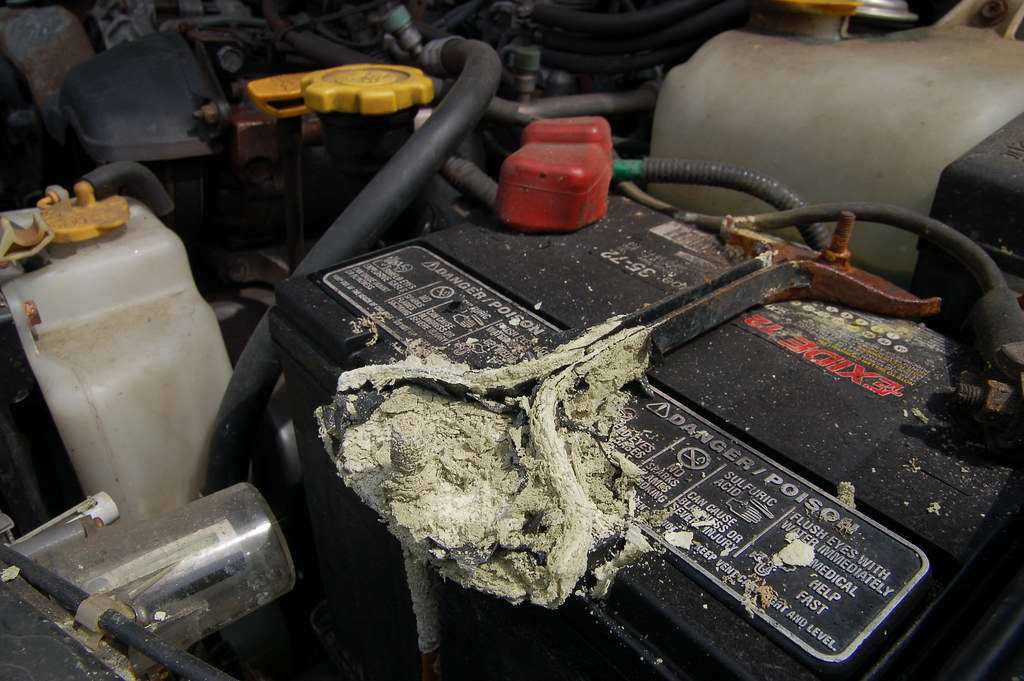 Unlike modern phones or even an old one for that matter, you can’t quite know, how much battery you have left in your vehicle until it starts to underperform.

An automotive battery is meant to be charged through the alternator when the engine is running and hopefully not be a problem for at least the next three to four years.

However, there can be few different factors responsible that can drain your battery before the expected end of its service life where your vehicle may not be able to deliver the same performance it used to prior.

When a car battery goes bad you may notice a few different symptoms that may not be limited to just the electrical system but cause various driveability problems as well.

In order for the starter motor to work, it first needs to draw power from the battery which engages when the key is turned in the ignition. The car battery delivers the amount of energy sufficient enough to rotate the flywheel. If the battery isn’t able to completely energize the starter, it may struggle to spin the gears with ample force and fail to start the engine.

Quite often when you hear the starter properly engage but not turn the engine, it is a problem with the battery.  However, a slow crank shouldn’t always be attributed to a bad battery. In certain circumstances such as a cold chilly morning, it is normal for the battery to not perform up to speck.

It’s quite confusing- should you spend time diagnosing the starter or just go ahead and put your efforts into jump-starting the car?

One of the symptoms that distinguishes a bad battery from starter issues is the dimming of the headlights. If you can’t turn your car over but do not exactly know if it is the stater or the battery, you can test it by observing if the electricals are working fine.

More specifically, when you crank the engine, the headlights on the vehicle shouldn’t dim out if your battery is fine. The battery is responsible for controlling all the electricals in the vehicle up until the alternator takes over and begins to recharge the battery itself.

However, apart from just starting issues, a bad battery can affect the electricals in other ways as well. Such as flickering interior lights, electronics malfunction, air conditioner not cooling properly with the engine off.

Another symptom of a bad battery that distinguishes it from a bad starter is a chattering noise.

If you have a no-start condition where you suspect a bad battery, you could simply listen for the noise that comes from the engine on startup.

A failing car battery usually would make a chattering or whirring noise which is not transient as opposed to a bad starter. With the starter issue, you would generally hear one single click followed by no engine movement.

Contrary to what most would perceive a car battery is for, it can actually have an impact on a vehicle’s performance. Ordinarily, a car is powered through the alternator as it’s running but in situations of increased power load the engine can draw energy from the battery to even things out.

In numerous vehicle’s though this can also be attributed as a safety feature where it can indicate the car battery needs replacement. That said, poor engine performance from batteries is a rare occurrence and you should look to see other crucial aspects before you replace the battery.

Nothing really stays the same. With time it is normal for the battery to undergo some changes.

As the battery ages, the chemical changes it undergoes in conjunction with the increasing acidity in the fluids can cause it to warp. This process is gradual and doesn’t occur to a serious degree on every battery that reaches the end of its service life.

However, a severely misshapen case can signal a high time to replace the battery. If the battery has not been running right or not properly taken care of, distortion of the case can occur rapidly and affect its performance. Further, a significant impact on the battery from an accident can also render the same unusable.

While corroded terminals do not necessarily indicate a bad battery they could however be a signal of something wrong outside. Commonly, corrosion can build up on the terminals either due to a loose connection or the battery running low on water. If your battery terminals appear to be corroded, go ahead and clean them with a dry cloth and make sure everything is in place firmly.

This should fix any minor issues within the battery and stop the corrosion from building back up. But if you constantly notice rapid corrosion of the battery, there’s a good chance, you may need a battery replacement.

Unable To Hold A Charge

With age, it is somewhat normal for the battery to decline in its capacity to hold current. But it can be a matter of concern if you have to jump-start the vehicle more often than you normally would. While there is no limit on how many times one can jump a battery, it should be kept in mind that it does take a toll on the dead battery and the alternator charging such battery. It also is a tell-tale sign that the battery needs a replacement. When the battery isn’t able to hold a charge, it usually does not produce a good current output as well. In such a case it is best to just replace the battery as it will help with the unnecessary load on the alternator as well as spare you the effort of jumpstarting.

How Should You Choose A New Battery?

Eventually, your car battery will go out no matter how diligent you are. And once it does, to buy a new one you have a lot of options to choose from. There are various brands, each claiming to be the best. But which one should you buy?

You can’t really determine the quality of any brand without actually having to buy and use one. And truthfully, the brand is not what you should be looking at. The most important thing you need to do while buying a new battery is checking the date at which it was manufactured. Car batteries today are shipped topped with acid which essentially adds shelf life to the unit. The acid-filled inside the battery deteriorates the battery slowly ruins it if it sits too long in disuse.

So while buying a new battery you need to make sure it is not more than one or two months old since it’s not going to be installed, right after being shipped out. A battery that has seen three or four months on the shelf can be a really bad deal as often they are seen to last as short as 2 years.

Should You Buy A Sealed Or Removable Top Battery?

Choosing the type of battery really is really your own decision. If you like to be diligent and keep battery water levels in check, going for a removable top is the option for you. Though if you’re someone who can not be bothered with battery maintenance then may you should go with the sealed type.

Expectedly, the removable top batteries last a little longer than the normal ones as they allow for prudent care and maintenance of the same.

Even if you’re not someone who likes to take care of their car, as a general practice it is recommended to have the battery tested using a multimeter on every routine service. This allows a more detailed look inside the battery and can help you determine when you would actually need a new one so you don’t unexpectedly get stranded with a dead battery.