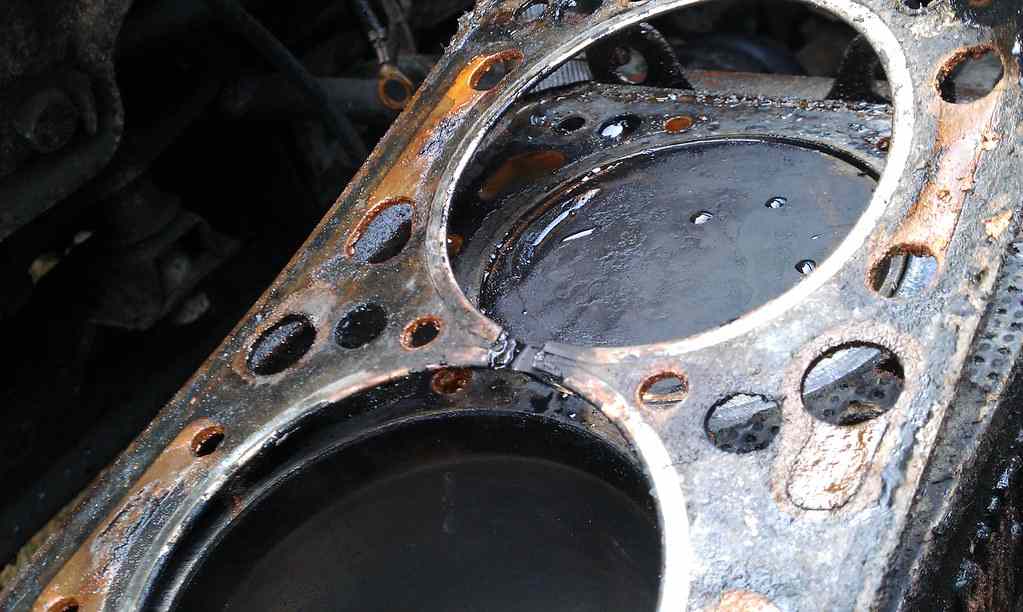 No one really wants to replace a head gasket.

It’s a nightmare for both the owner and the mechanic that requires a complete teardown of the engine just to place a metal sheet in the middle.

Some people choose to go with liquid sealers to fix the issue while few try to get rid of the problem by selling the car and foisting the expensive repair on someone else.

But you cannot always seal a leak and for some people selling their car is not an option. In which case, unfortunately, one would have to bite the bullet.

So, it’s important to know the various tell-tale symptoms that could confirm a blown head gasket because you cannot manually test for one at home neither can you drive for long in such a condition.

But before delving into the symptoms of blown head gasket, let’s first understand how it functions to seal the engine.

Head gaskets are a seemingly simple element in the engine block that help seal the head and the bottom part of the engine. They comprise of a number of holes, each made for a specific function. The big ones in the middle seal the operations of pistons, while all others surrounding the gasket prevent the fluids and oils from leaking out.

Head gaskets in modern cars are commonly made out of either steel or fiberglass though you may also see rubber, silicone, cork, felt, nitrile Teflon in the mix. By design they work pretty effectively and are not very expensive to buy but bolting them back in the engine does involve a hefty labor charge.

The symptoms of a blown head gasket are hard to ignore. With a loss in compression, the power loss along with improper combustion often make the vehicle run very poorly. If you suspect a blown head gasket here are the 6 tell-tale signs you would observe.

Since the head gasket is meant to seal the combustion processes, one of the more noticeable and clear signs you can find when diagnosing a gasket leak is pressurized air in the radiator. If the engine is losing combustion pressure to the cooling system, the air will make its way through the radiator and cause bubbles in the coolant.

Leaking combustion gases can also make it seem like the coolant is boiling as there is constant airflow from the bottom. Further to confirm suspicions for compression leaks, you can also choose to do a rev test. Have some depress the gas pedal while you observe if the bubbling coolants gushes out of its container.

And if it does you most likely have a blown head gasket. In such a case you’re quite past the pernicious stages of a head gasket leak and require an immediate replacement to prevent further damage.

Moving to the rear of the vehicle, another extremely common symptom you can note is a distinct white smoke billowing from the exhaust pipe. Like the overflowing radiator, this also occurs when the problem has escalated beyond the early signs as white smoke can only be caused by fluids, specifically coolant that is leaking into the combustion chamber.

Though you shouldn’t confuse this with the little white smoke that comes out in the morning. A little bit of smoke can be due to condensation but with coolant burning in the combustion chamber, you’ll notice an excessive white smoke gushing out of your tailpipe. This can be more noticeable when depressing the accelerator pedal, so in order to confirm you can have someone rev up the engine while you take a look at the tailpipe.

Coolant Loss With No Visible Leaks

This is where you could actually catch the problem a little early and have the vehicle tested by a professional before serious damage occurs.

When the head gasket develops an internal leak, it can allow fluids to seep into the combustion chamber and burn as they return back. So, as the coolant would constantly be consumed in combustion, you would find your antifreeze disappearing without a trace.

This will obviously be accompanied by rising temperatures in the engine, a situation where you should always look to check your coolant levels. If your coolant levels appear to be on the lower side without any visible leak, you could likely have an internal leak. You could also go back to see the smoke color to further confirm it’s a head gasket leak.

Some cars that have a coolant gauge can be helpful in such a problem though you may also have your check engine light on for a coolant refill sooner than expected.

This sort of problem can also occur if the radiator is not cooling the coolant in which case the antifreeze disappears by burning while circulating in the engine and not through combustion.

So make sure to check the radiator as well.

One of the signs that separates a normal coolant leak from other potential causes is contamination with ignition residuals. Because of the combustion gases espacing upwards, not only will you find the reservoir bubbling with air, you may not notice changes in the color of the coolant.

The constant engine misfires along with leaks of combustion gasses route their way into the coolant reservoir and turn it into a nasty black frothy liquid. If you notice a black and bubbling coolant, it could be a clear indication of a blown head gasket.

Another sign that could point to a potentially blown head gasket is a whole mishmash of automotive fluids. Your vehicle has a lot of fluid, each having a separate galley to travel but for all liquids to follow their path and stay contained in the system, a head gasket is important.

The head gasket has various holes all around the sheet, that is specially designed for fluids to travel in. If any one of those cracks, it could bring an avalanche of problems in the engine. The fluids will not be properly contained and you will notice certain ones to be mixed with the other.

Another symptom you may note with a blown head gasket is fluctuating RPMs. Now, idle RPMs aren’t necessarily a sign of a blown head gasket and can be caused by a myriad of reasons but if you observe your idle RPMs going up and down in conjunction with the more telltale symptoms, that could confirm the issue.

The most obvious reason would be the Idle air control valve though you should have the vehicle scanned for trouble codes to narrow down the problem.

Cause Of Blown Head Gasket

A head gasket can fail for a number of reasons. Each of which can be a problem in and of itself. So it’s important to note why you might have had the head gasket damaged in the first place.

An engine that’s been refitted with a new head gasket can run the risk of having the same problem again. Oftentimes, while rebuilding an engine it’s never quite possible to assemble back exactly the way the engine was built which more often than not results in decreased performance among other issues.

Rarely though but sometimes while placing a head gasket or when bolting back the engine, human error can lead to improper placement of the metal sheet. An improper installation will not be able to hold the fluid and may soon develop another leak.

The thermostat is a small valve present in the cooling system that regulates the flow of coolant into the system and its recirculation into the radiator for disposing of the collected heat. If somehow the thermostat isn’t able to regulate sufficient amounts of coolant or has a massive build-up of debris, it can potentially create excessive heat and cause the gasket to be damaged or cracked.

Another possible cause for a head gasket failure is a bad radiator. It actually can cause damage to the head gasket in very much the same manner as low coolant circulation. Due to the radiator’s inefficient performance, the coolant traveling over the engine block will run hot without properly actually having to cool down.

This will essentially increase the stress inside the engine and cause the gasket to warp and bend. You may also possibly smell a burning odor from the coolant due to the double effect of inefficient cooling of the already heating engine.

Most people think motor oil is used just to lubricate the moving parts. While in reality, it actually, also helps in cooling the engine. Engine oil while lubricating removes friction from the close movements and thus aids in bringing the temperature down.

Lack of lubrication is another common cause of an overheating engine. If the engine runs long enough without sufficient motor oil or with a dirty or contaminated one, it could inevitably lead to a blown head gasket.

So replacing your engine oil at the right intervals can not only help you obtain a better performance but also stave off a repair that’s worth a whole car itself.

Engine misfires are extremely hard on the internal components of an engine. If left unchecked not only will misfires cause harm to the head gasket but potentially damage the engine beyond repair.

If you hear unusual noises, any kind of shudder, or sputter from the engine, it’s best to stop driving immediately and have the engine diagnosed for issues. The reasons for misfires can be multifarious, but it usually can be fixed pretty easily when tended to on time.

Buying a new head gasket is not expensive at all, though replacing it is one of the most labor-intensive and expensive jobs a mechanic has to do. If you want to avoid such hefty bills the most important thing you could do is keep your engine temperatures in check and generally stay on point with the maintenance of your car.