Drum Brakes vs Disc Brakes: Which Ones are Better? 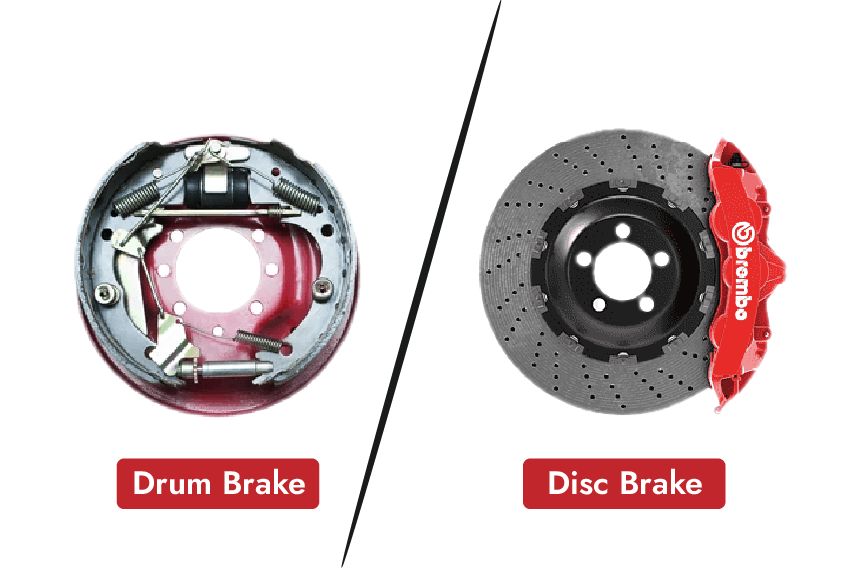 Brake technology, like suspension and fuel system technology, has advanced significantly in recent years. What began as a genuine endeavor in the 1960s to provide appropriate braking for fast cars has evolved into an industry where brakes range from supremely adequate to amazing. The use of carbon fiber, sintered metal, and lightweight steel, have all contributed to shorter stopping distances and safer automobiles overall.

One of the first moves toward better braking came in the early 1970s, when manufacturers moved from drum to disc brakes on a large scale. Because the front wheels carry the majority of a vehicle’s stopping force, only the front brakes were updated to disc during this time. Many manufacturers have since installed four-wheel disc brakes on their high-end and performance models, as well as their entry-level economy vehicles. However, in some cases, such as the 1999 Mazda Protege, a manufacturer would go from a four-wheel disc configuration to drum brakes for the rear of the automobile to save money on both production and purchase expenses.

Brakes are an essential part of every car, and we rely on them not just to stop but also to help us avoid an accident or collision. From the early days of woodblock brakes to today’s sophisticated drum and disc brakes, the automobile industry has come a long way. Drum and disc brakes are the two most common brake systems seen in today’s automobiles, and in many situations, both are employed on the same vehicle.

To realize the differences between drum and disc brakes, you must first comprehend the common concepts that both systems use to stop a car: friction and heat. A vehicle’s brakes slow down and finally stop a turning wheel by adding resistance, or friction, to it, producing heat as a consequence. The pace at which a wheel can be slowed is determined by a variety of parameters such as vehicle weight, braking force, and total braking surface area. It also depends a lot on how successfully a braking system converts wheel movement into heat (by friction) and then removes that heat from the brake components fast. This is where the distinction between drum and disc brakes becomes clear.

What are drum brakes?

After the age of hand levers, early car braking systems used a drum design at all four wheels. Drum brakes got their name from the fact that the components were housed in a round drum that revolved with the wheel. When the brake pedal was pressed, the shoes were forced against the drum, slowing the wheel. The brake shoes were built of a heat-resistant friction material similar to that used on clutch plates, and fluid was utilized to translate the action of the brake pedal into the movement of the brake shoes.

When the brake pedal is pushed the master cylinder causes the brake shoes to rub against the inside of the rotating drum, creating friction and ultimately slowing down the wheel to a complete stop.

The following are the advantages of drum brakes:

Some drum brakes require a low input force to activate, which means less pressure on the brake pedal. This can be accomplished through a variety of methods, including hydraulic pressure.

Drum brakes are more extensively employed on practically all types of automobiles since they are less expensive to manufacture.

They are slightly easier to maintain because they are inside of a housing and have superior corrosion resistance.

The following are the disadvantages of drum brakes:

Drum brakes tend to overheat in high-braking situations, such as going down a slope or frequent high-speed braking, because they lack a cooling outlet. This causes the brake shoes to glaze or smooth out, rendering them useless for braking.

Grabbing occurs when the brake shoe becomes damp or somewhat rusted in a drum brake. This leads it to provide more braking force than is required for a small period of time. When the tyres grab, they slide and continue to skid even after the pedal is released. This causes the car to lose control and is risky for the driver, particularly at high speeds.

A drum brake has a lot of parts that need to be repaired by a professional mechanic.

Due to a phenomenon known as thermal expansion, the drum expands significantly when heavy braking occurs. As a result, the driver must push the brake pedal harder to produce deceleration.

What are disc brakes?

Though disc brakes use the same basic principles as drum brakes to slow a vehicle (friction and heat), its design is significantly superior. Disc brakes employ a slim rotor and compact caliper to stop wheel movement instead of a metal drum that houses the key components. When the brake pedal is applied, two brake pads, one on each side of the rotor, clamp together within the caliper. Fluid is utilized to convert the movement of the brake pedal into movement of the brake pads once more.

Jaguar, on the other hand, put disc brakes on their racing car and won the Le Mans 24 hour race in 1953, shocking everyone with its braking ability. The Jaguar racing car’s disc brakes outlasted the other cars’ drum brakes, allowing it to make a winning debut. Disc brakes have been employed in mass-produced autos since then.

A disc brake is made up of a rotor, a caliper that houses the brake pads, and a piston. When the brake pedal is pressed, hydraulics drive the piston in the caliper to push the brake pad on one side of the rotor, while the piston’s backward force pulls the brake pad on the opposite side. This causes a squeezing motion, slowing or stopping the vehicle by pinching the disc with great force.

The following are the advantages of disc brakes:

A disc brake is simple to install and maintain, and you can even learn how to change the brake pads on your discs.

Because discs have such a wide surface area, any heat generated by friction between the brake pads and the disc escapes into the atmosphere. This keeps the disc from overheating and increases braking performance, especially in repetitive harsh braking scenarios.

Standard Performance Even In Rainy Weather

Even in rainy situations, disc brakes operate well and do not slip or grab like drum brakes.

The following are the disadvantages of disc brakes:

Disc brakes are prohibitively expensive, which is why automobile manufacturers prefer to use drum brakes on the rear wheels to reduce manufacturing costs.

Because of the intense squeezing motion of the braking piston on the brake pads, disc brake pads wear out faster than drum brake pads. This results in improved stopping force but shorter brake pad life.

When hot, brake pads on discs expand, and when cold, they compress. Because parking produces little heat, disc brakes are less likely to hold the wheels for a longer period of time. This is why high-performance vehicles have a distinct advantage.

There is a potential that the brake rotor will deform when braking at high speeds. This can happen when the discs reach extremely high temperatures and then cool quickly. Warping of the disc brake can also be caused by improper installation.

Drum brakes have a number of significant design flaws: they overheat fast, take longer to dry, and are often heavier than disc brakes.

However, because disc brakes expand when hot and shrink when cold, they cannot be utilized as a parking brake. They would gradually cool down, shrink, and lose contact with the brake disc if we used them as a parking brake after utilizing them. We’d clearly have an issue in this situation.

The only difference between the two brakes is their design. Disc brakes are more effective and reliable, but they do have drawbacks. Drum brakes are inconvenient, but they’re necessary for parking a car – unless you want to revert to using wooden blocks and sticks.

As a result, drum brakes are still used in current automobiles. Manufacturers typically equip the front wheels with disc brakes because they have to work the hardest, and the rear wheels with drum brakes. Some sports cars feature disc brakes on all four wheels, but one drum brake for parking.

Why do some cars have drum brakes instead of disc brakes?

Disc brakes have almost fully replaced drum brakes in commercial and passenger vehicles worldwide during the last 70 years. However, many cars, particularly more cheap, low-end versions, still use both to provide efficient braking. Drum brakes are most typically found in lorries, trucks, and other heavy cargo vehicles these days, although they are also present in some cars.

Because each can compensate for the other, many manufacturers choose to use both in their vehicles. Front axle brakes, on the other hand, are virtually always disc brakes because they are less likely to lock and disperse heat more effectively. Drum brakes, on the other hand, are typically employed on rear axles. Rear drum brakes can apply more force and lock the wheel when necessary without rendering the vehicle uncontrollable.