Driving With A Bad Catalytic Converter – What Happens Next? 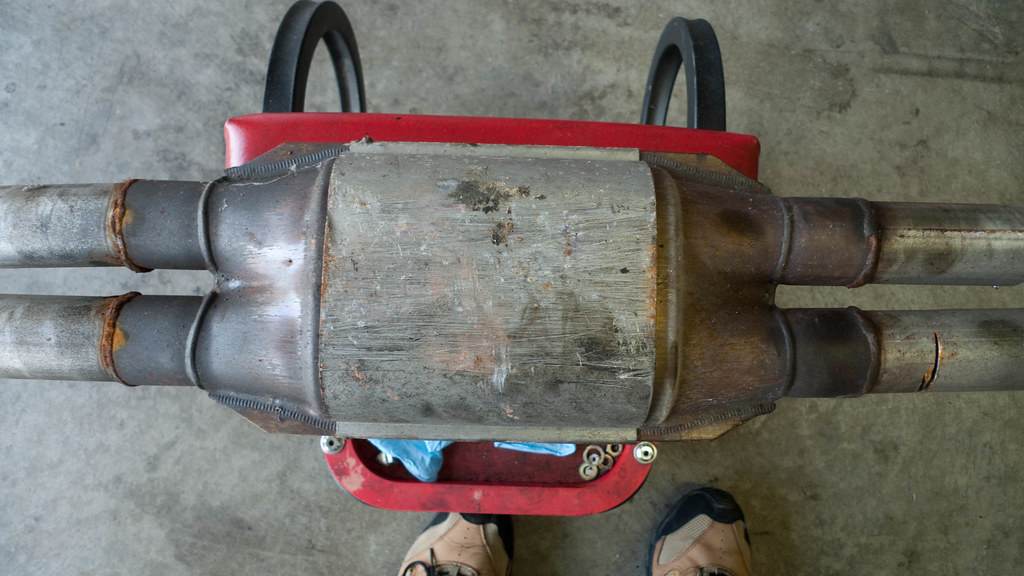 Catalytic converters, a favorite among modern thieves are fitted to cars in order to reduce the nasty emissions coming from the exhaust. They are essentially a honeycomb structure made of precious metals that converts the harmful compounds produced during the combustion process into less toxic substances.

To defer its costly replacement, it is common for one to wonder if they can just keep driving with a bad catalytic converter. But in practicality, they are more than just an emissions control device. Catalytic converters are actually quite an important component that works as an adjunct to other vital parts and sensors in a vehicle, especially the O2 sensors. They assist in maintaining the proper air-fuel ratio for proper and efficient combustion. In modern cars, a bad catalytic converter can cause an engine to run lean by altering the fuel ratios and in some cases even cause them to go into limp mode.

In some vehicle’s however, driving with a bad catalytic converter is not so much of a concern and you can cruise around without any immediate effects- until you have to face the more serious that it may cause from long-term use or realize that it’s illegal to drive with a bad or no catalytic converter.

Symptoms Of A Bad Catalytic Converter

Having a bad catalytic converter or driving without one can prove to be very unsafe and troublesome. it may not show signs in the immediate moment but you can be sure to have bigger problems down the road.

Another problem catalyst converters most notably create is a bad acceleration. The engine needs a nice flow of exhaust to operate efficiently and travel light. But when carbon build in the converter leads to excess blockage in the exhaust it could result in poor acceleration.

You may try to floor the throttle but not get a proper response. In some cases, simply cleaning the device can help.

Any kind of sound coming from the exhaust is a signal for you to get your car inspected. Though sounds from the exhaust can vary vastly, from hissing, pinging to thudding and wheezes, with each caused by a different reason.

However, if you hear a distinct rattling noise resembling that of a half-empty box of a jigsaw puzzle shaking, it could mean that the catalytic converter is damaged. A broken converter can cause the honeycomb mesh interior to break or shatter producing a rattling sound when you make a turn or brake your vehicle as these pieces jostle around.

What Causes Of Catalytic Converter To Fail

Catalytic converters are built to last with most maintaining proper functioning for up to as long as 10 years. However, their service interval is affected by a number of unavoidable factors like contamination, heat, physical damage, etc.

Older engines or the ones with overdue service tend to cause more rapid wear on the converter due to a number of reasons like excess burning of oil due to worn-out cylinder walls, sludge build-up, worn valve guides. A suboptimally functioning engine is known to cause faster wear and damage not only on the adjoining component s but can have a far-reaching impact on the fuel management system causing damage to the catalytic converter through incorrect air/fuel mixture, timing, or misfiring spark plugs.

The catalytic converter is made of lightweight ceramic material with a slim honeycomb frame. Though it is unprotected, outside of the ceramic material, It is wrapped in a dense insulation mat that not only holds the catalyst but protects against environmental damage. However, the coat isn’t equipped to protect the converter against physical damage coming from off-roading, broken exhaust hangers potholes, side curbs, speed bumps, and others underneath your vehicle can strike the catalytic converter causing a catalyst fracture. Once the ceramic honeycomb is fractured, the broken pieces jostle around breaking up into tinier pieces. As a result, flow is hindered and the pressure in the exhaust system increases leading to heat buildup and loss of power.

Oil Or Antifreeze In The Exhaust System

The introduction of oil or antifreeze in the exhaust occurs when there is a spillage due to an improper fuel mixture. When these fluids make their way into the exhaust system they coat its entire interior with soot and thick carbon. The growth of soot and carbon if unchecked can eventually clog the air passages in the converter’s honeycomb catalyst. This further leads to two problems. Inhibition of the efficient expunging of pollutants and Increased backpressures of the exhaust due to the clogging of pores in the catalytic converter. These two problems can further down the road result in a cascade of events that are destined to cause internal damage to the engine. It can cause the engine to actually pull back burnt gasses into the combustion chambers which will progressively lead to inefficiencies in the burn cycles and generate excessive heat in the engine compartments.

Processing Of Leftover Fuel In The Exhaust

By design, the fuel is meant to be burned in the combustion engine with nothing entering the exhaust but fumes, the remnants of the thing powering your vehicle. However, Incase of an overpouring of the fuel due to a faulty fuel management system or sticking float, some amount of the fuel is sent to the exhaust unburnt and is left for it to process. This continual burning of the fuel in the exhaust can overheat the converter beyond the threshold of operating temperatures and can be highly detrimental in the long run.

This is one of the more rare causes for a catalytic converter going bad. If you have a short commute to work or aren’t too fond of long drives, your catalytic converter might not be able to burn away the hydrocarbons it accrues with every drive as to get rid of the stuck pollutants, the device needs to reach a certain temperature where it is able to wipe out these contaminants.

In order to prevent this issue, you need not change your way of living but just an occasional 20-minute drive on the highway should suffice to the unclogging of the catalytic converter.

If you find a problem with your catalytic converter or are struggling with any other car problem that you can’t put your finger on, we are more than happy to help you out. Do not hesitate in reaching out to us, with our 40 point inspection, we can provide a detailed diagnosis to determine the cause of the failure.