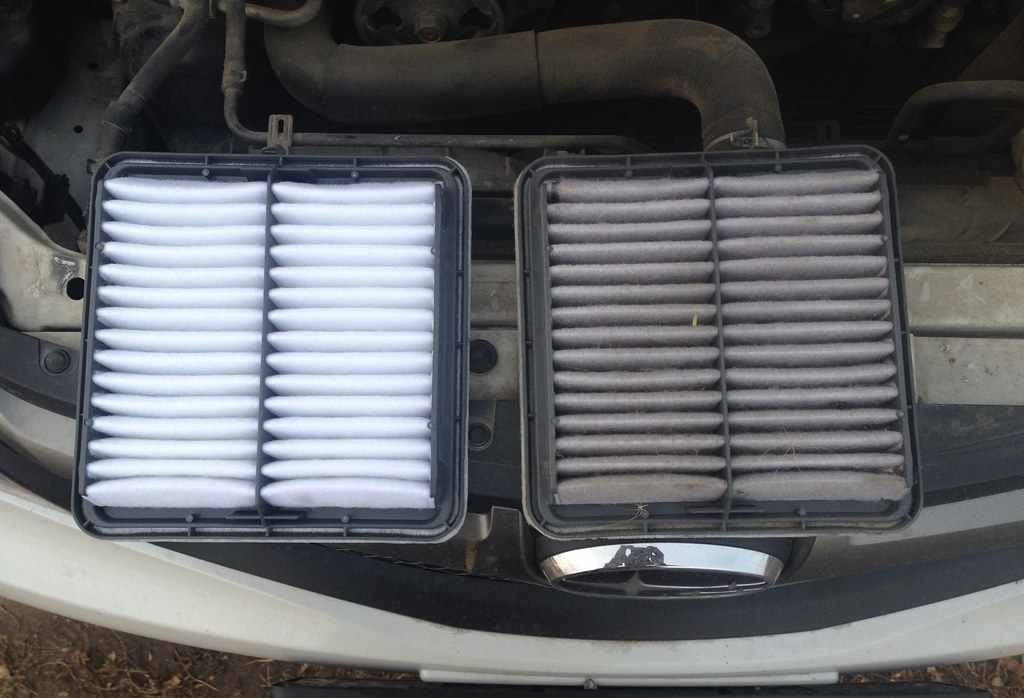 An air filter is present on all vehicles whether old or new. It looks the same and basically performs the same function, trapping dirt, dust, contaminants, and debris as the air passes through the intake.

But how it may affect the functioning of a car when clogged up can vastly differ between a modern and an old vehicle.

A clogged air filter in an older model vehicle will essentially cause the engine to run rich as the system has no mechanism to quantify the amount of air flowing in which results in a cascade of events starting from a rich condition that brings down mileage, causes misfires and even posses potential damage to some components.

But in a modern car that’s equipped with an airflow sensor much of those problems are ably dealt with. The MAF sensor allows the ECU to compensate for the restriction in airflow and prevents vital components from damaging while also not letting your gas mileage be affected.

And since virtually all modern vehicles come equipped with either a MAP or MAF sensor, we’re going to discuss the symptoms of a bad air filter that you may actually face.

Inspecting a dirty air filter and performing a replacement for one is arguably the easiest maintenance task one can do for their car. The location of an air filter can vary between various models but it is usually easily accessible from near the front of the engine block, attached to the intake tubing where you could simply pull it out to inspect and or replace it.

Once you’ve identified a dirty filter, you could choose to clean it if it’s relatively new but somehow has trapped a bigger piece of debris in one of its pleats. But in case your air filter is old and appears significantly clogged up, you might want to consider replacing it as it could make driving a lot harder and cumbersome for modern vehicles.

With a severely clogged air filter, it is rare that a car would even start over though you may only find your crank times to go up with one that’s noticeably dirty. A dirty air filter can occasionally create problems when a larger piece of debris causes a block in the air supply.

This happens typically due to a lack of power. When the engine computer registers a low air volume coming in, it proportionately reduced the amount of fuel. Such a restriction prevents a rich condition for the vehicle though limits the actual power it needs to turn over.

At its worst, a bad air filter can create a sluggish driving performance in a modern car. If you have a clogged air filter one of the symptoms you would experience is reduced engine performance. It is one of the telltale signs as the restriction in airflow forces the entire engine to run low on power in order to maintain the stoichiometric fuel ratio.

You may try to floor the throttle but will not be able to get the proper response as the engine is quite literally choked. The bad air filter will not allow sufficient air in which in turn will tick the engine control unit to match the fuel accordingly, producing delayed throttle response and overall weak engine performance.

When To Replace An Air Filter?

The recommended range for replacing air filters is around 10000 – 15000 miles or every 12 months. However, this shouldn’t be used as a hard and fast rule as it may not be the same for everyone. The actual interval really depends on a few different factors one major influence being the terrain and environment you drive in. If the air quality in your area is poor, it’s obvious you would need to change your air filter much sooner. Similarly, if you have fine air quality the replacement interval for your car would be longer.

What Would A Bad Air Filter Do On An Old Car?

If you have an old carburetor vehicle or one that’s made before 1990 you can expect to have a whole host of problems. Older models cars that do not include an airflow sensor of any kind have a really hard time dealing with air volumes as it can easily disrupt their fuel ratios, making them highly vulnerable to the effects of a clogged air filter.

As the engine is unceasingly poured gasoline, constricted to the same ratio, unbeknownst to the car, the air volume in the mixture is actually off. The engine does not have the amount needed to combust incoming fuel and fails to proceed with combustion in an efficient manner. This essentially leads to wastage of fuel, poor fuel economy, and higher emissions of hydrocarbons and other toxic gases from improper combustion.

Neglecting a dirty air filter, you may notice progressively bad gas mileage as the air being used for each unit of fuel is constantly being reduced. The more the amount of air is blocked from reaching the combustion chamber, the more fuel is wasted.

Upon depressing the accelerator, the engine is required to suck in more air to burn the fuel being injected for power. But when the air filter does not allow enough or constant air to flow in, it may cause the engine to struggle when speeding up.

At times the air filter may pass air sporadically while other times it may fail to supply air proportionate to the fuel, making for a rough and bumpy ride.

Another symptom of a dirty air filter on older cars is engine misfires. it is again due to disturbed fuel ratios. When there is a lot more air coming in

Unburned fuel that is not well contained and handled by the combustion chamber is often sent down the exhaust to be get rid of. When the fuel is forced to be processed in the exhaust you would notice a distinct black or greyish smoke coming from the tailpipe accompanied by the smell of burnt fuel that in some cases may even sneak into the cabin.

Further as a result of the engine running rich and incomplete combustion, you would also observe certain crucial components go off. The soot from the improper combustion will collect over the electrodes on the spark plugs and cause them to foul.

So if you have newer car anything after the late 90s chances are you’re probably not going to be much affected outside of frequent starting and driving problems which essentially help you prevent engine damage and to your benefit serve as a gentle reminder that you need your car serviced.

Much differently for older model vehicles, a clogged air filter will not deter you from driving but quite conspicuously wreak havoc on the entire system. So if you have an old carburetor vehicle it’s best to stay on point with your air filter replacement.