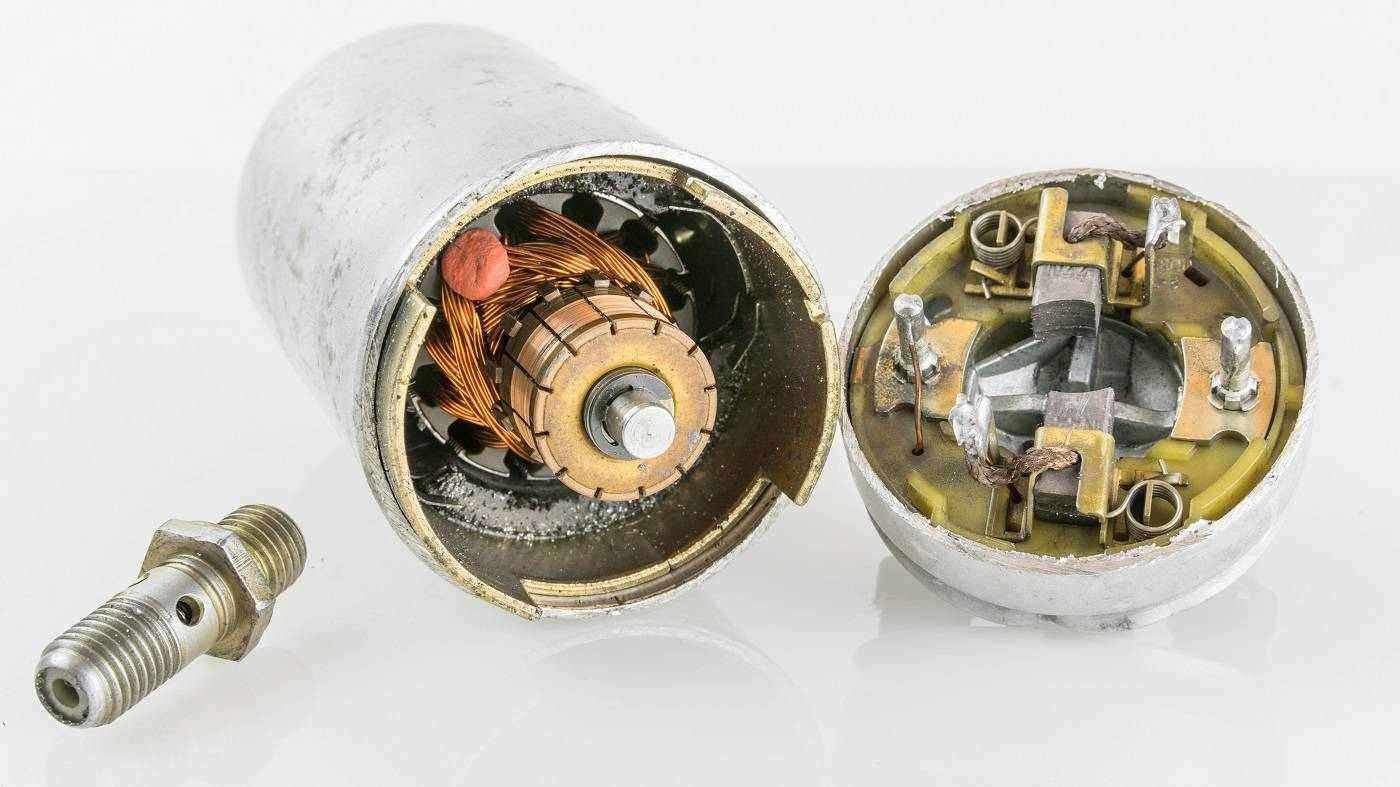 In order for the fuel to travel from the gas tank, get through the fuel filter, reach the fuel rail, be fine-tuned by the fuel pressure regulator, atomized and injected into the cylinders by the fuel injectors, it needs to be pumped out with a good amount of pressure. This pressure is created by the fuel pump.

The fuel pump serves a simple yet crucial function in the fuel system of a car. It pumps out pressurized fuel from the gas tank to maintain a consistent and good flow of fuel into the system.

It generally lasts for a long time, but when the fuel pump starts to go bad it may not be able to perform its function with the same capacity. The pump may either fail intermittently, producing surges and sometimes restriction in fuel though, more commonly a low fuel pressure.

The symptoms associated with a bad fuel pump typically arise from a poor fuel flow and a lean condition caused by it.

Without enough fuel going into the system, the first sign you’ll notice from a failing fuel pump will be trouble starting the vehicle. A bad fuel pump will almost always prevent the car from turning over though a worn and weak pump most commonly creates a slow crank as it may either produce low fuel pressure or not be able to send enough fuel over.

In a more serious situation, where your fuel pump has completely gone out, you may not even be able to start the vehicle. During intake, the bad fuel pump will not be able to deliver fuel to the engine causing the indefinite long cranks.

Normally, when a fuel pump primes, it makes a humming sound which can to your aid be actually used to see if the fuel pump is working or not. The sound is produced when the key is placed in the run position, turning the voltage to prime the fuel pump. It is a quiet, electronic sound that mostly goes unnoticed.

Conversely, though, if the fuel pump has gone out completely and needs to be replaced you will not hear any sound from the tank.

Rough operations and vibrations in the engine are usually a sign of improper combustion. When the fuel pump isn’t able to deliver a constant stream of fuel, it may cause the fuel-to-air ratios to be off resulting in uncontrolled combustion and constant sputtering in the engine.

The vibrations you notice while driving may or may not heighten in intensity when accelerating but either way it is not a good sign for your engine’s health and should be diagnosed by a professional as soon as possible.

Another notable sign of a bad fuel pump is delayed throttle response. As you place your foot on the pedal, you expect an instant response from the engine but with a bad fuel pump, you may find your car to be surprisingly slow to interact. the car may not take off immediately or hesitate to catch up on speed.

When the pedal is depressed, it allows a greater airflow into the engine which informs the ECU to adjust the fuel ratios by adding more fuel into the mix. Though with a weak fuel pump the engine may not be able to cope with the fuel demands as it should and struggle to keep pace with the required acceleration.

Oftentimes you may notice your vehicle running fine for a while but then abruptly it just stalls out. It essentially occurs when the weak fuel pump starts to die out which means the fuel pressure when the vehicle is running suddenly crashes and there isn’t enough fuel reaching over to keep the car in motion. The fuel delivery is off.

Your vehicle needs a sufficient amount of fuel to be delivered to each cylinder constantly in order to mix the amount of air for proper combustion. If your car loses fuel pressure it’s more than likely, due to a fuel pump though dirty injectors and a malfunctioning FPR can also fluctuate the stream of fuel. In any case, a complete shut-off in fuel delivery can be attributed to a bad fuel pump as it regulates the circulation of the fuel from its very container.

Loss Of Power Under Stress

One of the more tell-tale signs of a bad fuel pump is your vehicle’s inability to keep up with fuel demands. In conditions of stress or ones requiring more power from the vehicle such as uphill driving, immediate acceleration, or traveling with heavy loads, the amount of fuel needed for combustion has to increase. But, if the fuel pump is bad you may not get the response from the engine as quickly as you used to.

When you’re carrying a lot of cargo, the engine is essentially added with more stress which requires the fuel pump to work harder but if the pump is bad or failing it may give out on the engine and fail to adjust to the load. It may struggle to pump more fuel or have a weak response.

All engines have a cooling mechanism in place that helps dissipate the heat and keep the engine always at operational temperatures. The various parts such as the water pump and the coolant among others counter the heat produced under normal combustion conditions.

But when the engine is running lean, due to the disproportionately high air intake condition created by reduced fuel pressure, the combustion occurs with a lower amount of fuel which increases the time it takes for the mixtures to actually combust. In such a condition, the mechanical power generated is considerably less while the heat is significantly higher which ends up being absorbed by the engine. However, the cooling mechanism supposed to deal with the heat cannot fully compensate for such errs as the engine is not running in proper order.

When the engine computer notices, it is not receiving the fuel according to the calculations, it signals the internal diagnostics of something that may be wrong, causing your check engine light to come on. The code you will get for such a problem is P0087 which stands for low fuel pressure.

Fuel pumps generally last for about 100000 miles before going bad which is quite a lot. But there can be a few factors including your own habits that might contribute to reducing the life of the fuel pump.

The biggest reason for the premature failure of a fuel pump is not maintaining adequate fuel in the tank. The fuel pump submerged in the liquid is supposed to be cooled down using the fuel. The fuel pump is a device that spins and creates pressurized upstream of fuel, generating a lot of heat. To be able to consistently dissipate this heat the fuel pump needs to be covered in the fuel. If the fuel pump isn’t completely coated, it will run under high temperatures and eventually burn out.

However, this is not the only way your fuel pump would die gasping for fuel. Extremely low levels of gasoline can also cause the fuel pump to go bad from excess wear. When the fuel pump is forced to draw fuel from the very bottom it may also pick up sediments along with fuel which will not only dirty the internals of the fuel pump but also contribute to clogging the fuel filter and the fuel injectors.

So if you’re in the habit of frequently driving your car with low fuel you can possibly be causing the premature failure of your fuel pump. It is recommended as a general practice to always keep the fuel tank at about a quarter of the way full.

Another way you could damage your fuel pump is by not changing your fuel filter often enough. The fuel filter is required to filter the gasoline coming through the tank to ensure clean and contaminant-free fuel into the cylinders. Over time though the fuel filter can accumulate a significant amount of dirt that will eventually lead it to clog up. This blockage can restrict the flow of gasoline and even create back pressure which can damage the fuel pump.

Bad quality fuel is one other reason for degrading the condition of the fuel pump. low-quality fuel might contain contaminants and foreign matter, that may seep into the fuel pump and cause damage to it.

Though the signs mentioned above can help you diagnose a bad fuel pump and issues like stalling and sputtering can clearly indicate that something is off in combustion but in order to accurately determine whether there is a problem with the fuel system, checking if there is actual fuel pressure can really help you get to the bottom of the problem.

Ideally, you would want to use a fuel pressure gauge as it can provide an accurate reading that you can use to assess if the fuel pressure is optimal.

So in order to do that, you need to locate your fuel rail which is usually on top of the fuel injectors.

From there navigate to the corner where you may find a nut bolting the fuel line.

Next, grab a wrench and loosen that up just a little bit so you can observe the fuel spilling out once you crank the engine.

But before you do that, be sure to take precautions as you do not want fuel to be all around the engine bay. You can place a container underneath the rail and spread some towels around as well so don’t have to clean the engine after you’re done.

Then, starting up your engine you should see a fairly consistent and high-pressure flow of fuel from the nut. Once you’re done do not forget to bolt back the fuel line firmly.

Now, unfortunately, if you don’t see ample or any pressure you should immediately have your car inspected as low fuel pressure can be due to more than one reason. Low fuel pressure can cause your engine to run lean making it overheat and all sorts of other problems.

The symptoms of a bad fuel pump can be very similar to that of a bad fuel filter, both majorly restrict the flow of fuel into the cylinders but there isn’t really a definitive way to rule out one for the other. Prior to when the fuel filters were fitted in the gas tank, you could easily diagnose the real culprit by replacing the filter as they do not cost much. But in modern vehicles, you really can’t know which is at fault all by yourself. If you experience low fuel pressure, it’s best to have it diagnosed by a professional mechanic and replace whichever is the faulty component.