Vehicle Scrappage Policy: Everything You Need to Know – VehicleCare 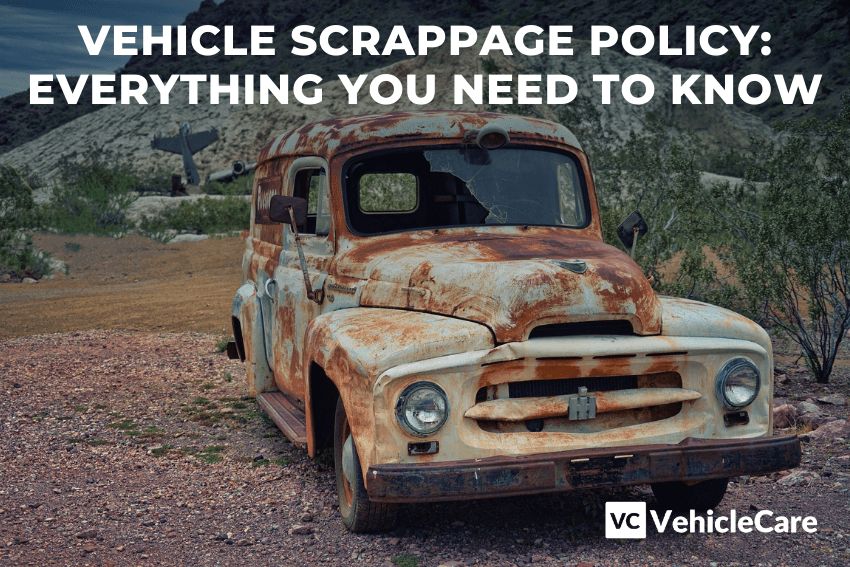 Private cars older than 20 years and commercial vehicles older than 15 years will be deregistered under the vehicle Scrappage Policy 2021. Our Prime Minister announced this policy in Gujrat during Investors Submit.

The vehicle will be put through a fitness test after a certain amount of time has passed. According to the country’s motor vehicle laws, a vehicle is only considered fit for 15 years. When a vehicle reaches the age of 15 years, it begins to pollute the environment when compared to a new vehicle.

When it was first released?

The Vehicle Scrappage Policy, which went into effect on August 13, 2021, is a government-funded initiative to replace old vehicles on Indian roads with modern and new vehicles. The policy is expected to reduce pollution, create jobs, and increase demand for new automobiles. Vehicle scrappage policies have been implemented in several countries, including the United States, Germany, Canada, and China, in order to boost their respective automotive industries and reduce vehicular pollution. Large automakers, such as Mahindra & Mahindra (2018) and Maruti Suzuki Toyotas’ by Maruti Suzuki and Toyota, are embracing this policy by launching scrappage centers (2019). This policy also contributes to India’s ‘Green India’ initiative by making room for a cleaner fleet of vehicles.

When commercial and passenger vehicles older than 15 and 20 years fail the fitness test, they will be scrapped.

The policy’s main goal is to:

The new scrappage policy’s main goal is to identify and recycle unfit vehicles in a systematic manner. The scrap policy’s ultimate goal is to eliminate the pollution caused by such vehicles in the environment.

Unfit vehicles that pollute the environment are a major impediment to the country’s development. This policy of car scrapping will reduce pollution while also providing other benefits. It means that metals like steel, plastic, and other metals will be able to be recycled. The cost of production will be reduced as well. It is expected that vehicle sales will increase now that the scrappage policy is in place.

Most importantly, the successful implementation of the old car recycling program will result in incentives for purchasing a new vehicle.

For private vehicles, vehicles older than 20 years will be deregistered beginning June 1, 2024. It will only happen if they fail the test or if the registration certificate is not issued.

Commercial vehicles that are more than 15 years old will also be deregistered beginning April 1, 2023.

Recent rulings on this policy include: As per the latest reports

According to a Zee News bulletin, the Vehicle Scrappage Policy will be enforced on April 1, 2022.

According to Gadkari, the vehicle scrappage policy is expected to boost automobile sales by 10-12 percent, resulting in higher earnings for both the federal and state governments following the scheme’s implementation.

Our honorable Minister of Road Transport and Highways of India has the following thoughts on the subject:

“The scrappage policy will increase GST revenue for both the federal government and the states.” I’ll talk to the finance ministry about how the new vehicle scrappage policy can provide more (tax-related) benefits,” he said.

The Ministry of Finance and the GST Council will make the final decision on whether to provide more incentives under the National Automobile Scrappage Policy.

Gadkari also asked automakers to consider offering discounts of up to Rs 1-1.5 lakh to customers who scrap old, polluting vehicles.

Prime Minister Narendra Modi announced the National Automobile Scrappage Policy in August 2021, with the goal of phasing out unfit and polluting vehicles.

The vehicle scrappage policy, according to Gadkari, is important not only to reduce vehicular pollution but also to strengthen the economy. The policy will make it easier to scrap old cars, attract new investment, and create jobs. He stated that he would like to establish at least three to four vehicle recycling or scrapping centers in each of the country’s districts.

Gadkari stated that the vehicle scrappage policy can generate investments in the long run.

Overall, Gadkari claims that the vehicle scrappage policy will generate Rs 10,000 crore in investments and 200,000 jobs, both directly and indirectly.

“The auto industry generates a revenue of Rs. 7.5 lakh crore every year. In five years, the goal is to raise it to Rs. 15 lakh crore. India’s goal is to achieve net-zero emissions by 2070, which is critical for us. One of the solutions, I believe, is scrappage policy “Gadkari stated.

Commercial vehicles over 15 years old and passenger vehicles over 20 years old will be required to be scrapped if they fail fitness and emission tests under the new policy. The policy does not classify a vehicle as scrap solely because of its age but also takes into account other factors such as brake quality, engine performance, and so on. The goal is to phase out old cars, reduce pollution levels in cities, and boost automotive sales, which are still slowing in India’s post-COVID recovery phase. Furthermore, the vehicle scrappage policy is said to be part of a larger stimulus package that was primarily requested by original equipment manufacturers (OEMs) in order to stimulate demand.

RTO RULES FOR SCRAPPING THE VEHICLES.

Some points to note are the process of scrapping:

Is it necessary for me to cancel my car insurance before scrapping my vehicle?

The RC of the car must be canceled before contacting the car insurance company about canceling the policy. At the RTO, have the registration certificate revoked.

What Happens If I Don’t Cancel My Car Insurance Policy And My Car Is Scrapped?

If the car is to be scrapped, it is critical that the registration certificate be canceled at the RTO. Let’s take a look at how to cancel the car’s RC and notify the insurance company about the vehicle’s scrappage.

Vehicle Theft Prevention: If the RC is not canceled, there is a good chance that a criminal will use the scrapped car document to steal a car. As a result, if you turn off the car’s remote control, you can prevent vehicle theft.

Misuse of Vehicle Documents: Once the vehicle has been scrapped, the registration certificate must be immediately canceled.

Will I Get a Car Insurance Refund for a Scrapped Car?

Keep in mind that when scrapping the car, the RC must be cancelled. After the RC has been canceled by the Regional Transport Office, you can cancel the policy. Refunds will be calculated on a pro-rata basis.

Scrapping old vehicles has its own set of incentives.

The center has announced a number of incentives for people who retire their old and inoperable vehicles. To begin with, owners of such vehicles will receive a scrap value that is equal to 4% to 6% of the ex-showroom price of the new vehicle they will be purchasing. Second, if the owner has a certificate of deposit, there will be no registration fees for a new vehicle purchased. Finally, the state government has been asked to offer tax abatement on motor vehicles. There are discounts of up to 5% for non-transport vehicles and up to 15% for transport vehicles.

Disincentives for keeping old vehicles on the road

Owners of vehicles older than 15 years will find it more expensive to keep them, as the cost of renewing a fitness certificate could increase by 62 times for commercial vehicles and 8 times for private vehicles.

Furthermore, states will impose a green tax in addition to the road tax that early vehicle owners must pay.