Engine Hydrolock: Everything You Need to Know – VehicleCare 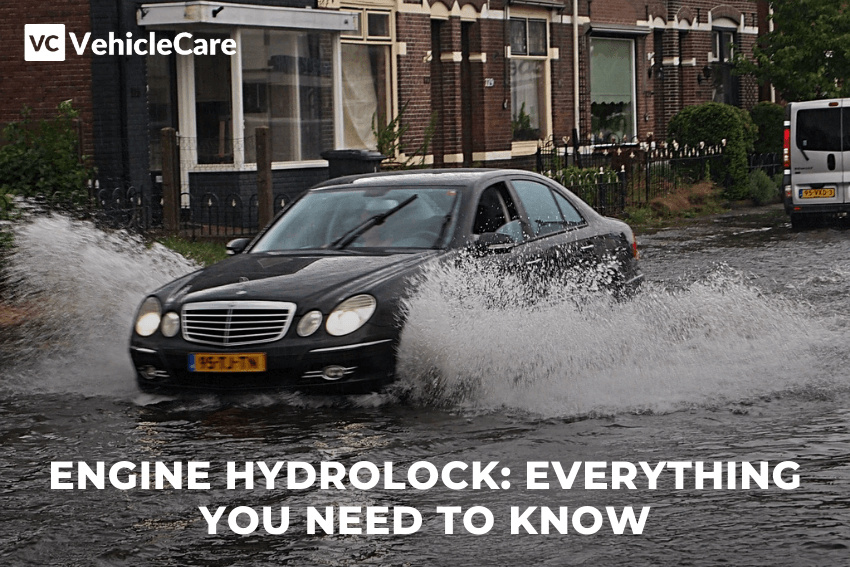 Hydrolocking or also known as hydrostatic lock or hydraulic lock is a condition when an engine either sizes or undergoes a disastrous failure due to entering a concerning amount of water in the cylinders. Now the internal combustion engines are designed keeping in mind that the piston’s work is to compress the fuel-air mixture. Water being a virtually incompressible liquid requires a huge amount of pressure to be compressed. But, the design of an internal combustion engine does not provide such enormous pressure.

So, considering the case of hydro locking, when the water enters and fills the combustion chambers(or enters the cylinders), the rotating crankshaft tries to force the pistons upwards in an attempt of compressing the fluid(water). But, the reaction force from the engine is so large that it exceeds the maximum stress tolerable by the engine components. Now when the pistons are unable to reach the top dead center(uppermost position of the piston) the engine is unable to produce any work or power and the engine comes to a halt.

Hydro locking occurs when the volume of the water entered into the combustion chamber is more than the clearance volume. The clearance volume is the amount of volume left in between the top of the piston head and the cylinder head when the piston is at the top dead center. The water thus prevents the piston from reaching the top and hinders the functioning of an internal combustion engine.

Damages due to Hydrolocking

The damage of hydro locking on the engine can differ depending upon the situation. If your engine speed is low you may escape with no damage at all. Your car will only come to an immediate stop. But, you have to tow your car to the nearest shop and get an immediate hydro lock engine repair To prevent your engine from a great disaster, if your actions are not taken immediately the inner parts of the engine can corrode, resulting in an increase in repair cost. On the other hand, if you are driving above an ideal speed, hydro locking can lead to greater damage and extensive consequences.

The force with which the piston is trying to compress the water that entered the combustion chamber can lead to the bending of the connecting rod, and crankshaft and can cause fractures in cylinder walls and other components of the engine. The connecting rod can even lead to breakage if the engine is running at its full capacity and can even bash out of the engine block. Hydro locking can even occur to the engine when it is not running. The case is with the flood cars(the cars standing open to heavy rain or flood). The water fills in the engine cylinder. If the fluid in the above-mentioned scenario is not removed quickly, it can lead to greater damage like corroding of the engine inside.

Some generalized damages due to Hydro locking are

But unfortunately, if more water is drawn into the cylinders there are chances of hearing a loud knocking sound. And if the combustion chamber continues to fill up, it would just be a matter of moments before the engine shuts down. In the current situation, your engine is in a condition where it will not turn over and you are stuck. The following are some of the most common symptoms of Hydro locking in internal combustion engines:

Prevention is always better than cure, and to prevent you must know what causes it. So let’s take a look into the reasons which cause Hydro Locking

1) As discussed the intrusion of water is the main cause of hydro locking as far as internal combustion engines are concerned. The water can enter the engine in many situations, like when the car is parked open to the sky during heavy rainfall. Another such situation can be when a vehicle is exposed to flood water. In both situations, the water is allowed to enter the engine flowing through the intake manifold of the engine and finally entering the combustion chambers of one or more cylinders.

Now, this type of water intrusion can take place not only when the car is parked but also when the car is running during heavy rain or flooded roads. This type of water intrusion can occur in both running and non-running engines, though resulting damage tends to be far more severe when a hydrolock occurs at full engine speed. It is the responsibility of the car owner to prevent such situations as these could lead to high repair costs.

2) Another cause of hydro lock is when some other mechanical failures lead to the leakage of the engine coolant into the cylinders. One of the most common situations is the failure of the head gasket failure. Failure of a head gasket can lead to allowing the coolant to enter the combustion chamber from the water jackets.

Now, this type of cause is riskier if we are talking about a non-running vehicle. But for a running vehicle, the leakage of coolant can lead to other problems like rising in the temperature of the engine due to lesser coolant presenting a reduction in the performance of the car.

3) Hydro locking can also be caused if the fuel injector is jammed or failed and damaged leading to flooding of the cylinders with fuel. Although this kind of situation rarely happens.

There are some precautions that can be taken in order to prevent hydro locking of your vehicle and your hard-earned money on costly repairs. The most suggested way of doing so is to remain aware of your engine problem and keep up with scheduled maintenance. Don’t underestimate small damages and problems and pay special attention to your vehicle’s driving conditions.

Park your car out of water during storms or heavy rainfall. Prevent air modifications that lead to the lower level of your air intake and the intended design level. Keep water wavy from the air filter while washing your vehicle or have the practice of removing them during the washing of the vehicle. Don’t let the head gasket get failed due to overheating, also check if it is allowing the coolant to enter into the combustion chamber and if so is happening, repair it immediately.

How to Unlock A Hydrolocked Car

The internal damage can be said when the piston or connecting rod was ejected through the engine block or was distorted so severely leading to the damage of the corresponding cylinder wall. But if there is a situation where the engine was unable to produce power simply due to the incompressibility of the fluid in the engine or we can say that the engine was just locked, the vehicle can be restored by applying proper service. To unlock a locked car the most important step is removing water from the cylinders.

This should be done by removing the spark plugs and cranking over the engine. Now if the situation is when the hydro locking occurred while the vehicle was in no working condition or was idle, clearing the obstructing water is all that is required, and removing the spark plug is not even necessary. The water should be drained out of the engine block to avoid the corrosion of the cylinder wall.

Now if the case like where the hydrolocking occurred when the engine was in working or running condition, there is a high chance of finding internal damaged parts. The engine in such cases should be pulled out and opened to analyze every part thoroughly. There is a high chance of finding broken or bent connecting rods, cracked pistons, and scored bearings. To properly examine the engine the cylinder head should be pressure tested and the engine block should be closely examined for cracks.

Hydrolocking is the situation where the engine fails to produce power due entering of fluid into the combustion chambers. Some situations that lead to hydro locking are driving through puddles at high speed, driving the vehicle in a storm or heavy rain, or parking a vehicle in a flood.

How much does it cost to fix the Hydrolocked engine?

The amount of fixing a hydro-locked engine depends on the severity of damage caused by hydro locking. The average cost of unlocking a locked engine can range from $2,000 to $10,000.