Losing Coolant But No Signs Of Leaks? – 5 Common Causes 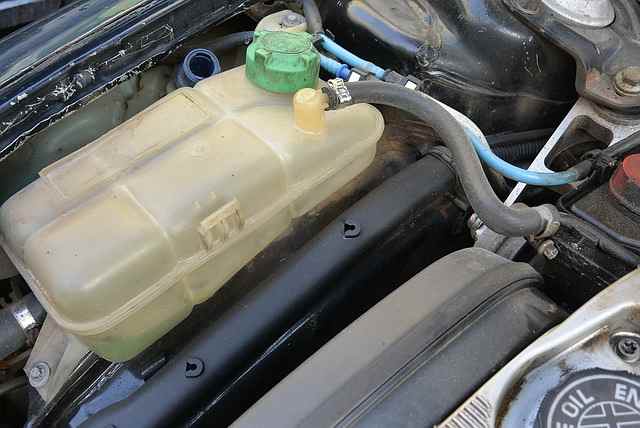 The way an engine maintains optimal operational temperatures inside is not very complex. Fluids travel over the engine block absorbing the heat generated and make their way back going through the cooler dissipating and dispensing the heat collected, ready to be recirculated to continue the process.

It is a liquid cooling mechanism that works in tandem with air circulation and fairs reliably well against a particularly sultry summer day as well. So even if you don’t regularly check the reservoir, it would be quite noticeable to see the engine running hot without the coolant in place on a regular day.

There are essentially four places the coolant can fall off into – Leak outside the car. A leak inside the car. Burn through the exhaust. Combust inside the engine. If the coolant was falling off outside, it would have left conspicuous traces of a colorful liquid. But since, the case here is not so simple here we would have to probe a little deeper.

Unspecified and rapid depletion of the coolant could be a result of a number of complex problems in your car. Some may be self-diagnosable while others might be too minute to clearly figure out for oneself.

Rapidly disappearing coolant poses a real threat to an engine. If the levels of antifreeze fall below critically, it can cause the engine to sustain substantial internal damage both in hot climates and freezing cold temperatures. Here are the possible reasons for a coolant leak without any visible signs –

There is a maximum and a minimum cap labeled at the reservoir which indicates the proper amount of fluid to be replaced in. And while you may not think much of a slight overfill, it can actually contribute to the anti-freeze disappearing. As the coolant is used in the engine to transfer heat, it contracts and expands causing the liquid to spread around in an inefficient manner. Further, this can even lead to electric damage, malfunction in the coolant system, and many other things. So whenever replacing coolant by yourself, make sure to not overshoot and stay a smidge below the maximum line.

Perhaps one of the most common reasons to assume is a small internal leak. If traces of the fluid are nowhere to be found outside, checking the hose that connects the reservoir could be a good idea. Sometimes the pipe can develop cuts by normal wears and tear though other times it could also be a small animal chewed away at the pipe too. Typically, you should find residuals near the engine compartment or just under the reservoir.

A blown head gasket is a problem that goes beyond just the coolant disappearing. It can create a mishmash of fluids inside the engine block and cause the coolant to be burnt through the exhaust. Although an overheating engine would not be your only problem, driving with a blown head gasket itself will bring a whole other smorgasbord of issues that might even cause your car to stall out on you.

One of the earlier symptoms of this problem is disappearing coolant. You can check this by observing the color of the exhaust smoke of your car. When the coolant is burnt in the engine, it usually comes out as white chalky fog. To confirm this issue, you can have someone rev up the engine and notice the tail end of the vehicle yourself. In case you do found to have a blown head gasket, it would not be viable to top the coolant again. Your immediate course of action should be to visit your nearest mechanic before the problem escalates.

Besides the coolant itself, the engine has various other mechanisms in place to maintain its operational temperatures. That would be the water pump, electrical fans, vents, and a few others.  An overheating engine isn’t necessarily a cause of low coolant, certain abnormalities in the proper functioning of the engine can result in the engine putting out more heat than usual.

Normally an engine runs with temperatures in the vicinity of 180-200 Fahrenheit which is optimum for the various cooling mechanisms to counteract and compensate for. Though when the temperatures reach beyond the bounds of normal it can literally turn your engine hostile. Coolant that is trying to travel over an overheating engine can end up burning up on the block as the temperatures from both sides collide into generating even more heat. This generally results in short-term consequences of coolant burning where you may smell a strangely peculiar and sweet fragrance from the engine block. In the long run, though, this means irreversible internal damage to the engine.

Another cause of coolant burning over the engine block is an ineffective or damaged cooler. The coolants once covered the length and breadth of the engine block need to back inside the cooler from where it will be recirculated to absorb heat again. However, if the cooler is not able to perform its job effectively, it will lead to higher temperatures inside the chamber due to heightened heat that is now a result of both coolant and engine overheating. Again the coolant will be burnt to some degree every time it makes its way over the engine, leading to depreciation in the cooling properties of the coolant and also the quantity of it.

Mysteriously disappearing coolant cannot be ruled out with a single cause. The symptoms and consequences with which the invisible leak may arise in a vehicle can be quite varied and puzzling and would ideally be suited for a more thorough check-up. Certain conditions may even exacerbate the long-term health of your engine and possibly incur irreparable damage too.  It is best to have the vehicle duly diagnosed by a professional worth his salt and keep the coolant at the right levels.