What does RPM Mean? [Complete Guide] 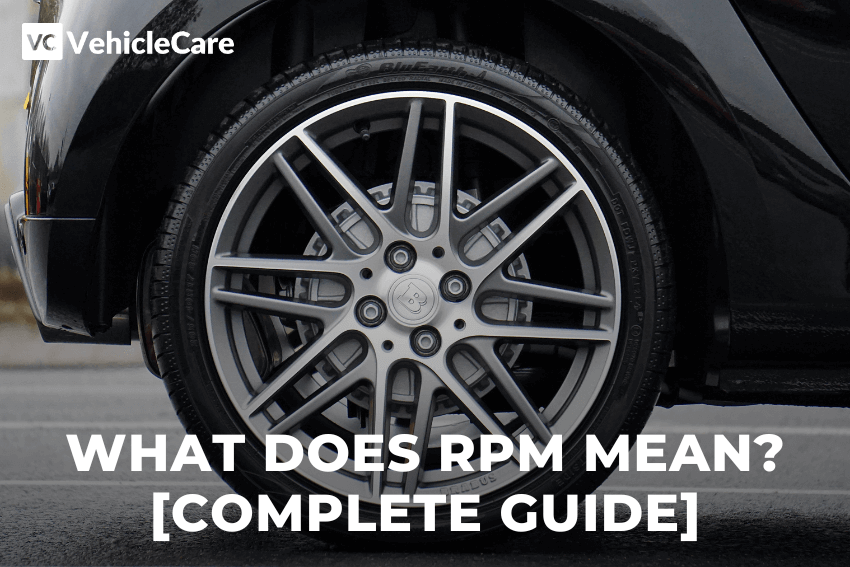 The number of Revolutions Per Minute (RPM) is the number of rotations per minute. It’s a measurement of rotational speed or frequency around a fixed axis. The International System of Units (SI) does not recognize rpm as a unit. Because the term revolution is a semantic annotation rather than a unit, this is the case. If necessary, the annotation is done as a subscript of the formula sign.

The RPM is most commonly used as a tool to determine when it is time to swap gears. Change gears at lower RPMs for best fuel efficiency and mid to higher RPMs for better acceleration as a general rule. By acting as a gearshift indication, the RPM serves a critical function in preventing damage to the engine or gearbox. Novice drivers, in particular, may struggle to determine when gear changes are necessary. The tachometer aids them in this selection and protects drivetrain components from undue damage.

What does RPM stand for?

RPM is the abbreviation for “revolutions per minute.” It’s a measurement of the engine’s rotational speed. An engine will generate more power according to its spinning speed. The pistons in an engine are pushed down by the combustion of air and gas. Torque refers to the amount of force transmitted to the crankshaft. A horsepower is a unit of work that is measured over time.

The engine burns more air and fuel at higher RPMs. This basically means that it usually produces more electricity. It also consumes more gas than usual. RPM uses a tachometer to display numbers. If the tachometer is pointed to the “2,” the engine is rotating at 2,000 RPM. The tachometer is used by drivers with manual transmissions to determine when to shift. Too many may harm the engine. Although each automobile is unique, your owner’s manual may contain information on the most economical shift spots.

What is RPM in car?

When you press the accelerator pedal, the engine rpm rises, and power rises with it – at least to a degree. An engine’s greatest power isn’t always produced at its highest rpm. The highest horsepower figure is usually listed first, followed by the rpm at which it occurs, such as 252 hp at 5,600 rpm. In turbocharged or supercharged engines, torque, which is a measure of the engine’s immediate twisting force, is often found at lower rpm and may appear as a range, such as 273 pounds-feet at 1,600-4,500 rpm.

A tachometer is a device that displays the number of revolutions per minute (rpm) of an engine. The redline is a zone at the top of the tachometer range that is usually indicated by a red line. The engine can be damaged if it is revved past its redline. Vehicles with an automatic transmission are set to shift before the engine speed reaches that point, thus this is only a worry for automobiles with a manual transmission. Depending on how hard you press the accelerator pedal, this will change as well.

An automatic transmission will shift at whichever engine rpm produces the optimal mix of efficiency and smoothness in normal driving, making the tachometer obsolete. Manual gearbox drivers must develop this ability on their own, and the tachometer can assist them. A rev limiter prevents the engine from racing into the redline in newer cars with manual transmissions, preventing potential damage, but it’s up to the driver to recover from the often violent stoppage and shift to a higher gear.

What is RPM in bike?

The higher the RMP, the higher the bike’s speed and, as a result, the higher the fuel consumption. Every spin of the crank causes the gearbox to move in a way that corresponds to the engine’s speed. The speed of the bike does not rise or decrease based on the movement of the bike when the gears are changed. As a result, it could cause a more dramatic increase or decrease in RPM. The same idea can be used for gasoline intake. However, depending on the RPM, the torque produced by the bike drops or increases.

When it comes to the riding experience of a bike, the overall relevance of RPM is indicated. It’s because the bike shakes at higher speeds with higher RPMs, causing difficulties with the back, legs, and foot. A mid RPM range allows for a more comfortable ride. With lower RPMs, you may anticipate the bike to be more fuel-efficient and provide a more seamless ride.

It is critical to maintaining a steady speed while riding the bike. It would not only provide a smooth riding experience, but it would also ensure that the bike’s performance was at its best. Using your motorcycle at higher RPMs all of the time can harm the engine and result in increased maintenance costs. The ideal RPM to operate your bike at would be exactly half of the highest torque and RPM the bike is capable of producing. RPMs have a beneficial or negative influence depending on how the bike is used. When you ride the bike at lower RPMs, you have power at your fingertips with just a tiny adjustment of the throttle. In addition, the engine’s durability is preserved, and you gain better fuel efficiency.

What RPM should a car drive at?

In a car with a manual transmission, the driver has control over the RPM. A driver accomplishes this by moving the car’s gears and increasing or decreasing the engine’s speed. The acceleration of the car increases as you shift gear at a greater RPM. If the RPM is excessively high, it might harm the engine or possibly cause the automobile to explode.

Engine efficiency is best achieved in an RPM range of 2000 to 2500. While revving to 3000 RPM enhances your speed, the engine has to work harder, lowering your fuel economy. A rev governor in modern cars with manual transmissions stops the engine from reaching redline. It will, however, be up to the driver to recover from the disruptions and shift to a higher gear.

Automatic gearbox cars are programmed to shift before the engine speed reaches the redline. The RPM range that an automatic car can drive, on the other hand, varies from car to car. The RPM range difference between the cars is also determined by the transmission type. When shifting gears, most automatic transmission cars have a suggested RPM. It has a speed range of 1200 to 1800 RPM.

This RPM range is also influenced by how you drive. When driving and shifting gears in an automatic car, the optimal RPM range is 2000 RPM to 2800 RPM.

What is high RPM for cars?

1000 RPM denotes that whatever the vehicle’s meter reads is multiplied by 1000 to get the revolutions per minute. If the needle on a gauge with rpm*1000 written on it points to 1, the rpm is 1000. These gauges can be found on vehicles with high-revving engines, such as motorcycles and cars. On these gauges, you’ll find numbers ranging from 1 to 13 or so. On a 1000-scale meter, a reading of 6 indicates that the engine is turning at 6000 revolutions per minute. This is especially helpful for beginners who are unsure when to shift gears.

These gauges are commonly found in automobiles with low-revving engines. If you sit next to a bus driver, you’ll notice this type of gauge on the console. Depending on the engine, these gauges may have numbers ranging from 5 to 20. These gauges are typically found on diesel engines.

For two and four-wheelers, the concept of RPM is the same. Two-wheelers, on the other hand, may reach higher RPMs than four-wheelers. A bike in fifth gear, for example, might reach 100 kph at 6-7 k RPM. To reach the same 100 kmph, an automobile would only need to travel 2-3 kilometers.

How does RPM affect car performance?

More fuel is used in the same period and more power is produced when the revolutions per minute are higher. Higher torque and hence lesser horsepower are produced at lower RPMs, whereas lower torque and higher top horsepower are produced at higher RPMs. While extremely low rpm and heavy loads will cause immediate damage to your transmission, continuous high rpm may cause long-term damage.

Running an engine 3000 RPM below its redline for extended periods should be OK. If you run the engine at that RPM while stationary, it will sound different, and it will grow hot rapidly because it will not have the cooling airflow that occurs when driving.

Moreover, when you push your engine to its limits, you may expect a lot of wear and tear. Maintaining a higher RPM not only raises the engine’s temperature but also lowers the quality of the engine oil, necessitating more frequent oil changes.