What Are the Different Types of Car Batteries – VehicleCare 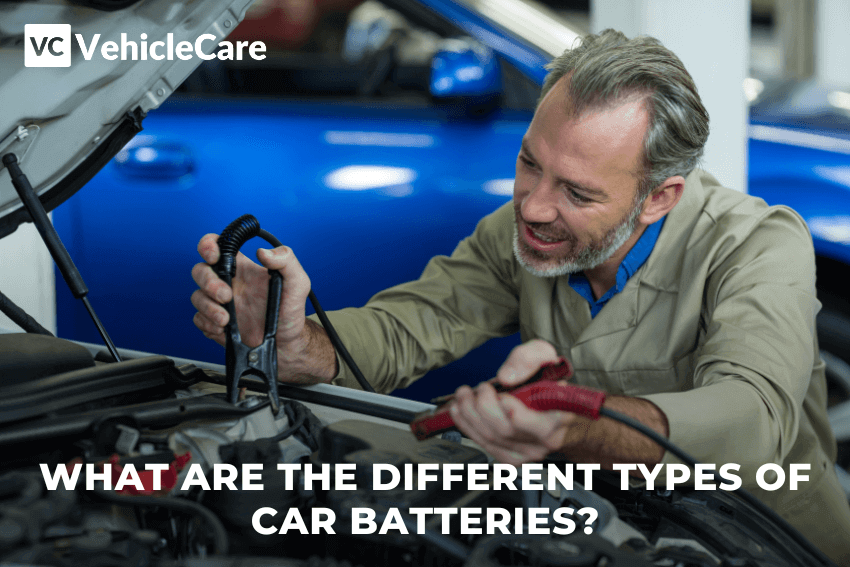 You are not alone if you are unsure about which battery type is best for your vehicle. Surprisingly, the majority of automobile owners are ignorant of the wide range of car batteries available today. As a result, they settle with subpar, ill-fitting, and inexpensive automobile batteries that deteriorate over time.

Car batteries are an essential component of the ignition system. They are in charge of providing electrical energy to the automobile’s starter, which is used to start the engine and power different automotive components such as the radio and lights.

This is one of the most underappreciated batteries because it is mostly used in PHEVs and is slightly more expensive than a standard Lead-Acid battery. For the past few years, a Lithium-ion Battery has become well-known. A Li-ion battery is used in recent hybrid and electric vehicles.

The Li-ion battery stores substantially more charges than the other batteries. Another advantage is that these batteries are lighter than normal automobile batteries of comparable capacity. Li-ion batteries have a lengthy life expectancy of roughly 5-10 years, regardless of how they are used.

The majority of vehicles on the road have a starter, lighting, and ignition batteries, or SLI batteries for brief periods of time. Apart from starting the automobile, it also powers all of the car’s electronics, such as the interior and exterior lights, the audio system, and so on. The charge cycle of an SLI battery is quite brief. Because of this, the time it takes for the battery to charge and subsequently drain is significantly reduced.

Like the starter engine in an automobile, this sort of battery can produce power in short bursts of time. The SLI batteries are made up of six galvanic cells that are arranged in a series to form a system that produces 12 volts. At full charge, each cell produces 2.1 volts, resulting in a total output of 12.6 volts.

These are the batteries that require the least amount of maintenance. Because lead-acid batteries are sealed, they cannot be serviced like other batteries. These batteries are only available for replacement. Lead-Acid Batteries also supply power to the starter motor in brief bursts.

Deep cycle batteries are built with larger battery plates and denser active material to endure repeated charge and discharge cycles. These batteries aren’t designed to deliver high bursts of power for a short time, but rather to deliver sustained power at a lower current for a long time.

For their rapid discharge rate, deep cycle batteries are a little pricey. These batteries, on the other hand, have a lengthy shelf life, lasting up to six to seven years if properly cared for.

Nickel-metal batteries have a longer life cycle than lead-acid or lithium-ion car batteries and are most typically used in hybrid automobiles.

It also has a high self-discharge rate, generates a lot of heat at high temperatures, and is quite costly. They are therefore acceptable for hybrid cars but not for rechargeable electric vehicles.

There is no gas ventilation in a VRLA battery or valve-regulated lead-acid battery. It’s small and portable, making it simple to store. Because these batteries are sealed, they do not produce hydrogen gas and are hence the safest. The only disadvantage of VRLA batteries is that they are sealed and thus unserviceable.

AGM and gel cell batteries are the two varieties of VRLA automobile batteries.

It charges 5X faster than a regular automobile battery and has a 3X longer cycle life. AGM batteries are ideal for vehicles that have automatic start-stop and brake energy recovery. AGM batteries have only one disadvantage and that is that they are expensive.

A gel cell battery is robust because it has a gelified electrolyte. It has a high resistance to heat, physical trauma, electrolyte evaporation, and spilling. Gel cell batteries have a long cycle life and are shock and vibration resistant.

This battery was created to be a better alternative to flooded batteries. It’s still a lead-acid battery with an electrolyte solution, but instead of the lead-antimony plates used in traditional batteries, it employs lead-calcium-silver plates. It’s normally sealed and doesn’t require any upkeep.

The EFB battery is a high-performance wet cell battery that has been tuned. It has a liquid electrolyte solution, but it’s a sealed battery that can handle twice as much cycling.

In comparison to typical flooded batteries, the EFB battery can give around 85,000 engine cranks. It was launched as a lower-tier choice for durability and performance to the AGM battery, and is frequently used in cars with simple start-stop technology.

How to choose the best car battery

The lead-acid battery in a car is designed to deliver a great quantity of current in a short amount of time. This burst of current is required to turn the engine over when it is first turned on. The alternator supplies all of the power that the automobile requires once the engine is started, therefore a car battery can last the entire life of the vehicle without ever being drained below 20% of its total capacity. When used in this manner, a car battery can live for many years. A car battery uses thin plates to increase its surface area in order to achieve a large amount of current.

A lead-acid car battery is usually rated in two ways:

Specific group sizes are used by some vehicle manufacturers more than others. Many General Motors vehicles, for example, utilize a side-post battery. Instead of having battery posts on the top, side post batteries feature cable ends that screw into the side of the battery. The average group size is 70, 74, 75, and 78.

The top posts of European vehicle manufacturers’ batteries (Volkswagen, Audi, Mercedes Benz, BMW, and so on) are often recessed in the corners such that the top of the battery posts is about similar to the main height of the battery. A specialized ventilation system is included with many of these battery group size fitments, and some are also fitted in the trunk or even under the rear seat, as opposed to the typical placement under the hood. The normal group sizes are 41, 42, 47, 48, and 49.

Most Japanese and foreign automobiles, as well as many imports, use a group size with standard, top-post battery fitments. The most common battery group sizes that most people are familiar with are listed below. While these are more popular and appear to be easy to change, it is still critical to choose the correct group size to ensure that your car battery remains secure in the battery tray of your vehicle.

Some group sizes, for example, have the same width and length but a lower height. If a taller battery is mistaken for a smaller group size, it may not fit properly in the battery tray and/or battery hold-down, or the battery post may come into touch with the car’s metal hood, sparking, shorting, or triggering a vehicle fire. 24, 24F, 25, 34, 35, 51, 51R, 52, 58, 58R, 59, and 65 are the most frequent battery group sizes.