Hill Hold Control in Cars: Everything You Need to Know 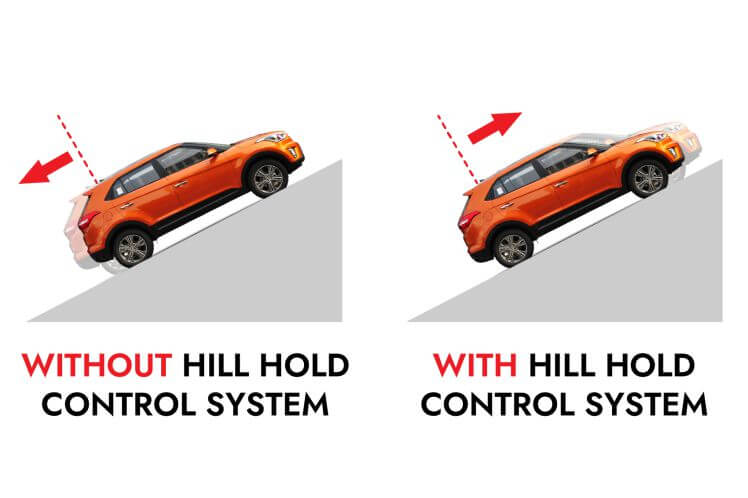 Hill-hold control is a driver aid technology that keeps the car from rolling back on a hill, slope, or any other inclined surface when the driver begins driving from a stop. When attempting to drive a car up a slope from a stop, the risk of the vehicle rolling back is always present moment the driver removes their foot off the brake and applies the accelerator. This is particularly true for inexperienced and novice drivers. In such cases, the hill hold control system will hold the brake for a few seconds longer to provide the driver adequate time to launch the car on the climb.

How Does Hill Hold Control Work?

Two sensors are used in the system’s operation. The one in the accelerometer calculates the slope’s longitudinal gradient, while the other controls the braking system’s engagement or disengagement. If the sensor on the accelerometer determines that your car is on an inclination, the hill-hold control is automatically enabled. When you let off of the brake and press the accelerator to drive, the hill-hold control system keeps the vehicle stable for a few seconds longer, providing you time to apply the accelerator or shift into gear in a manual gearbox vehicle.

Once the engine is spinning enough power to propel the car forward, the hill-hold control system lets go of the brakes. Hill-hold control was formerly only available in high-end vehicles, but it is now popular in budget vehicles such as the Tata Nexon, Kia Sonet, Maruti Suzuki Swift, Honda City, Ford EcoSport, and others.

Clutch Detection: Hill-start control in cars with a manual transmission or stick shift is one of the most obvious applications. To start a car with a manual transmission, you must first remove the engine from the transmission by pressing the clutch. The automobile is no longer kept in place by the engine’s braking power, and if the brakes are also off, as they generally are while accelerating, the car can roll freely, especially if it’s on an incline.

Incline Detection: Hill-start control is likely to be required if a car is stopped on an uphill while the engine is still running. A sensor that detects an incline of more than a specific amount, such as three degrees or more, can send a signal to the hill-start control, signaling that the vehicle is about to roll. The downside of inclination detection is that a car might be on an incline without requiring hill-start control, such as when a tire falls into a pothole.

Engine torque detection: This simply determines whether the engine produces enough torque to propel the vehicle ahead. If it is, the hill-start control is disabled because the automobile is no longer at risk of rolling backward.

Brake detection: This determines whether the brakes are used and whether there is enough braking force to keep the vehicle in position.

Backward motion detection: While it isn’t technically necessary, certain systems may incorporate a way to detect when the car is rolling backward.

The incline sensor identifies whether the vehicle is on a hill, which is how incline detection systems function. The presence of a brake is detected by a brake sensor. If it isn’t, the car is at risk of rolling backward, thus the system engages the brakes to keep the vehicle stationary. Clutch detection and brake detection can be used simultaneously in a manual transmission car to identify when the vehicle is in danger of rolling backward and the brake can be applied.

The hill-start control system is made up of a number of different sensors (though the specific sensors used may vary depending on the implementation), an electronic control unit (ECU), and a brake actuator controlled by the ECU that can apply the brakes as needed to keep the car from rolling backward. We’ll look at each of these safety and regulatory devices separately; keep in mind that some hill-start control systems may not require all of the following components:

Angle sensors: Angle sensors measure the car’s angle on an incline, which correlates to the hill’s grade.

Torque sensor: Torque is the engine’s rotational force that accelerates the vehicle from a standstill. The torque sensor detects how much torque is transferred from the drivetrain to the wheels.

Wheel-speed sensors: These detectors, which are normally mounted on the axles, can determine the rotational speed and direction of the wheels.

Electronic control unit: The vehicle’s embedded computer system that receives signals from numerous sensors is known as the Electronic Control Unit (ECU). Based on that information, the ECU determines when the brakes are required. The ECU may also calculate the moving resistance, which is a function of the car’s weight (as detected by the pressure sensors) and the slope of the hill on which it is driving (determined by the angle sensors). The amount of engine torque required to move the car uphill is calculated using the traveling resistance.

Break Actuator: An actuator translates an electrical signal into a physical movement. The ECU sends a signal to the brake actuator, instructing it to apply the brakes. The brake valves are then activated, sending brake fluid to the brakes to halt the car from rolling back down the hill. In a hybrid vehicle, the electric motor can be employed in place of the brake to provide enough forward motion to keep the vehicle from rolling backward.

The torque sensors assist the ECU in determining if the engine’s torque is sufficient to overcome the moving resistance once the driver begins to accelerate (already calculated by the ECU). If it is, the ECU sends a signal to the brake actuator, instructing it to release the brakes and allow the vehicle to continue moving.

The driver should, in theory, be completely unaware of anything that is going on. The brakes should be released in such a way that the driver is unaware that the brake force is still being applied after the brakes have been released. The driver will only understand later that he or she never had to be concerned that the vehicle might slide back down the hill and collide with the car in front of it. It’s uncommon that driving safety is so easy.

Hill-start control’s key advantages should be self-evident. In some cases, it makes driving easier, and it can also help to improve driving safety. After all, no one wants their automobile to tumble down a hill in reverse. In that circumstance, there are simply too many opportunities for harm.

Hill-start control, on the other hand, isn’t solely for the advantage of the car’s driver. It’s also for the sake of the traffic that passes through it. As a result, it’s possible that, as a matter of public safety, all cars will someday come standard with hill-start control and other safety and regulatory systems. Everyone is concerned about driving safety.

Another advantage of hill-start control is that it reduces wear and tear on other parts of the vehicle, such as the handbrake, which would otherwise be used to accomplish the same task manually. Furthermore, while starting out on a slope in a car with a manual transmission, you don’t have to ride the clutch, which means the clutch lasts longer. Hill-start control also reduces the strain on the engine and drive train by preventing the car from rolling backward, which would normally have to reverse the car’s backward motion in order to get it up to speed.

Hill-start assist isn’t as vital as seat belts or airbags, though. Unless the vehicle rolls backward a significant distance or the vehicle is a truck carrying an abnormally high cargo, an accident caused by not being able to get your car going forward in time on a hill is unlikely to be fatal. The necessity to move a car up a slope, on the other hand, is significantly more common than deadly collisions. Hill-start assist is something that can come in handy on a daily basis, but (if you’re lucky) your car’s airbags will never be used.

Hill-start control is one of several specialized safety features available in today’s autos (backup cameras are another example) that aren’t absolutely necessary for safe driving but help to make the experience more enjoyable and worry-free.

This is a fantastic safety feature that makes driving on slanted roads a lot easier. The hill-hold control system is designed to keep the vehicle from rolling back down a hill or slope, hence ensuring its safety. A car with a hill-hold control system is also safer for traffic behind it. Furthermore, the system reduces wear and tear on other automotive components, such as the handbrake, which is frequently utilized to perform the same function manually.

When starting out on an uphill, you also don’t need to ride the clutch, resulting in less clutch wear.
Hill-hold control relieves stress on the engine, which would otherwise have to compensate for the vehicle’s backward motion in order to get it up to speed.

Preventing the idea of a safer car is one that detects hairpin corners using data from satellite navigational charts. The system will look for other cars, pedestrians, and obstacles in blind zones and track their speed and direction. The car’s onboard computer will use all of this data to determine the optimal course of action, which could include braking, swerving, or both [source: ICT Results]. Car navigation algorithms may in the future perform risk evaluations, such as deciding that hitting a squirrel on the left is preferable to hitting a woman with a stroller on the right.

Someone has, I suppose. Hill-start control, hill-start help, or just hill holder is what it’s called, and it’s very likely to be available at a dealership near you. It’s an excellent addition to the plethora of technological safety and regulatory equipment that keep you safe behind the wheel.