Petrol vs Diesel vs CNG Car: Which Is Better in India 2022? 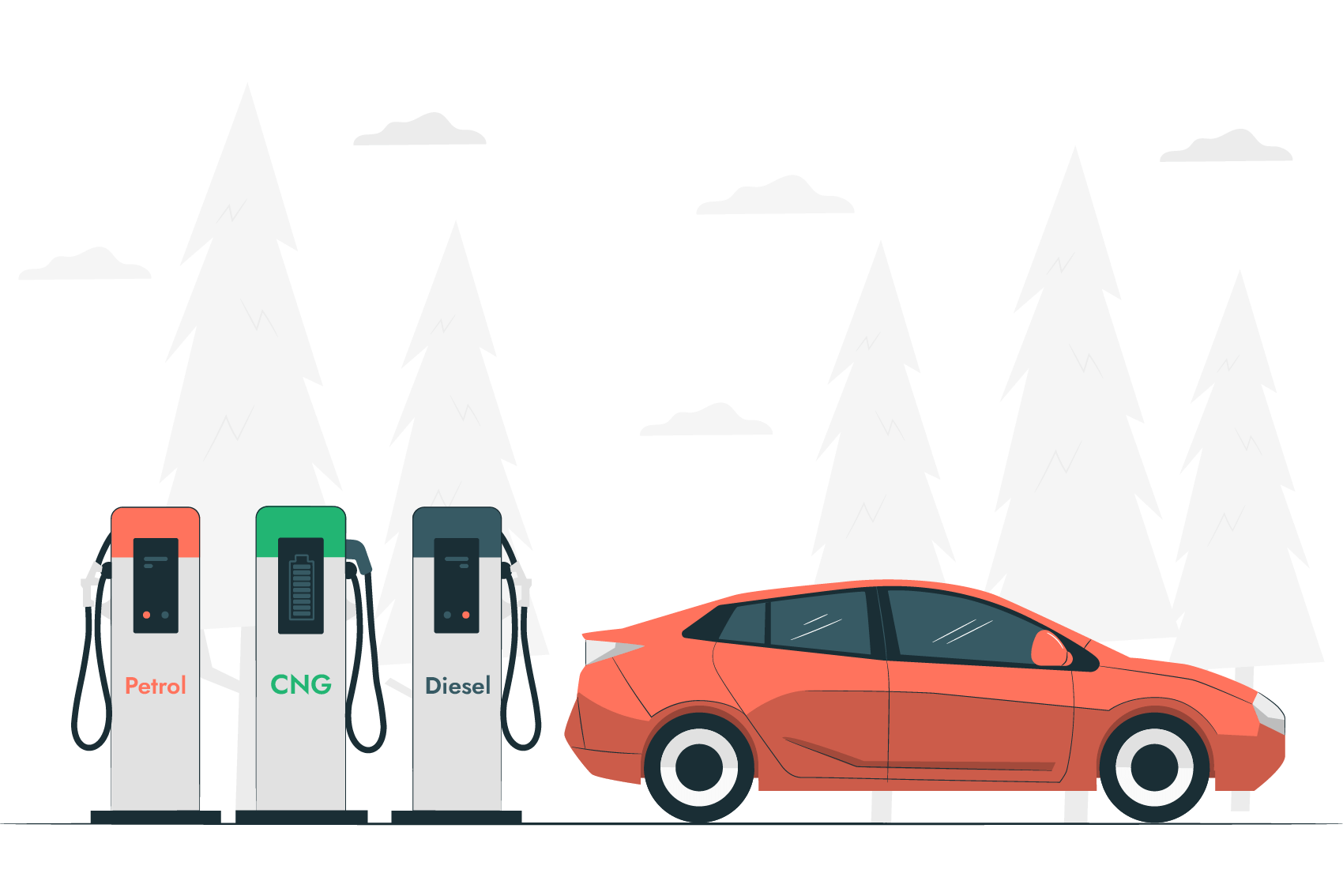 In India, vehicles are of three types: Petrol (Gasoline), Diesel, and CNG. Each of these has its own unique advantage over the other. However, people nowadays have to choose between petrol, diesel, and CNG when purchasing or leasing a vehicle. The choice you make will depend on your requirements, as well as your budget, as each type of fuel comes with its own set of pros and cons. We look at all three fuels in detail to help you choose the one that suits you best.

The Science Behind Petrol

When you pull up to a pump and start fueling your car, you’re probably doing it using gasoline. But what’s actually going on inside that tank of gas? There are two main components—fuels and additives. The fuels are just that—the fuel part of what makes up gas (the other being air). This includes a blend of hydrocarbons with different carbon numbers, making up more than 70 percent of gasoline sold around the world. Some gasoline has chemicals added to reduce pollution (like benzene, for example) or octane rating enhancers like tetraethyl lead or ethanol.

The Science Behind Diesel

Petrol and diesel cars get their fuel from two different places. Petrol is refined from crude oil, while the diesel comes from a process called hydrocracking. Though both produce energy through combustion, they’re different fuels—and that affects how we use them. If you want to know more about them, check out How Stuff Works and its look at how fossil fuels are formed and transformed into usable sources of energy. And read up on why gas prices can fluctuate so dramatically over time by checking out The Impact of Gas Prices on our Economy.

Compressed natural gas (CNG) is a fossil fuel, a type of hydrocarbon that contains primarily methane. It’s made from natural gas and can be burned as a clean alternative to petrol and diesel. In recent years, it has been promoted as an eco-friendly energy source for vehicles. But just how environmentally friendly is it really?

Which car is best CNG petrol or diesel?

When buying a car for your business, it’s important to look at multiple factors. Unfortunately, fuel type and environmental impact aren’t part of that decision-making process as much as they should be. The good news is that we can help you choose which fuel type is best suited for your company vehicle fleet over time with our cheat sheet. These days, experts recommend that fleets invest in a variety of power sources, including solar and electric vehicles (EVs), to ensure all employees have easy access to cleaner cars. All three methods of powering a car—petrol, diesel, and compressed natural gas (CNG)—have their pros and cons regarding cost savings and air pollution reduction.

Which car is better petrol or CNG?

Both of these fuels are derived from fossil fuels, but there are some major differences. As we’ve said before, conventional petrol and diesel come from crude oil, while CNG (compressed natural gas) is derived from a fossil fuel that’s trapped underground. We all know that carbon dioxide emissions contribute to climate change, so it stands to reason that burning fossil fuels has environmental consequences. However, things aren’t quite as black and white as you might think. That’s because not all gases that come from oil drilling are created equal—and by different, we mean different by weight.

Is CNG the fuel of the future?

In India, we have petrol, diesel, and compressed natural gas (CNG) for vehicle fuels. This question needs a lot of thinking as there are many factors involved with all of these including the cost of ownership and maintenance. Our aim is to choose which among these three will be better than the others. To get clarity on which one will be the most suitable fuel for our vehicles we have to look at some of its factors like pollution it generates, cost per km driven and impact on the environment while manufacturing, etc. It would also help to see what are benefits each one of them offers and how they can affect our country’s economy and population density.

If you’re interested in owning a car but concerned about how much fuel costs will affect your bottom line, your best bet is to buy a diesel or CNG car. It’s also worth noting that, while they’re pricier than their petrol counterparts, diesel and CNG cars tend to be more reliable over time. Make sure you get your vehicle checked by an expert before investing; dealers may try to sell vehicles that have major defects with engine capacity just because of discounts offered by automobile companies during festival seasons.

Is CNG cheaper than diesel?

CNG (compressed natural gas) prices are lower than diesel. For example, according to a 2018 analysis by Amul Motivator, an Indian dairy company, at 3.2 rupees/kWh, CNG costs Rs 18/ltr while diesel costs Rs 35/ltr. On average, then, you’d save 40% if you used a CNG car instead of a diesel one (assuming you could get 100 km per ltr). Still, that doesn’t take into account maintenance and upkeep costs; depreciation is also higher for CNG cars. Even so – given current rates – it’s worth considering a switch to a cleaner fuel source if it means better mileage and enhanced performance (and lower monthly payments). In fact, many Indians are doing just that…

Is CNG cheaper than petrol?

Diesel may be cheaper than petrol, but you have to consider your fuel costs as a whole. From initial purchase price to maintenance and refueling, it’s important to take into account all factors before deciding which car is most cost-effective for you. For example, diesel cars have higher compression ratios and require diesel fuel; if you don’t have a nearby source of cheap diesel, your overall costs could quickly mount up.

Why are CNG cars low in India?

When it comes to automobiles, there are very many aspects that need to be considered. You have to consider what type of engine is being used, how much fuel will be spent on driving from one point to another, and other factors such as its speed capabilities and cost of ownership. Another factor that should be considered is pollution levels by cars. In recent times there has been a lot of confusion about which cars are best for pollution level control in big cities like Delhi and Mumbai. These two cities account for more than 45% of all vehicles sold each year. However when we talk about engines what many people have to do with is Petrol versus Diesel.

Which is better car petrol or diesel?

Before you choose to buy a car, it is important to decide if you want to go for a petrol car or diesel vehicle. For example, if you drive frequently and cover long distances, then choosing a diesel vehicle can be more cost-effective. In case you spend most of your time driving around town, there will be no benefits of buying a diesel car. Petrol or diesel vehicles have their own pros and cons and so far as gas emissions are concerned, both types have become eco-friendly compared to earlier years. So let’s check out which one is better between petrol or diesel cars by looking at some key aspects when making your decision on what type of car you should buy next time.

Which car has more life petrol or diesel?

For many of us, our cars are a passion, something that is as much about status as it is about utility. On one hand, there’s something visceral and primal about driving your own car (or motorcycle), but there’s also a practical side to vehicle ownership—and that has to do with cost. The fuel we put into our vehicles can make or break budgets, so which is better for you—petrol or diesel? So diesel is better in budgets.

Is a petrol car good for a long drive?

Petrol cars are known for their longevity and high mileage. But is it good for a long drive? Petrol or gasoline as we all know is an organic compound of carbon and hydrogen. Although, it’s not used as fuel in itself; petrol needs to be refined with additives to become a usable fuel source. So if you want to drive for long hours, get a petrol car that has high mileage and will take you from point A to B without much hassle on your end. The best petrol cars last between 100,000–150,000 km before requiring major repairs. Some supercars last up to 300,000 km before needing replacement parts like engines or brakes.

Which fuel is better for cars?

Petrol is generally more expensive than diesel and CNG. The biggest benefit of switching to a petrol engine, however, is its efficiency when compared to diesel or natural gas. When it comes to running costs over time, then, there’s no contest—the petrol car is still by far the cheapest way to get around. The major drawback of petrol engines used to be their high fuel consumption but that changed drastically with stricter emission regulations coming into force across most countries in recent years. Nowadays, even entry-level cars tend to come with variable valve timing and direct injection technology for better fuel economy (and better power as well).

Can a petrol car run on CNG?

Unlike diesel and liquefied petroleum gas (LPG), which are burned within a combustion engine, petrol is not an ideal fuel for a conventional internal combustion engine because it tends to auto-ignite or self-ignite. In an internal combustion engine, a combination of air and spark is required to ignite the petrol. This can cause problems for a car’s complicated electrical system when used in conjunction with its normal fuel source (gasoline). The combination can also have other negative effects on your car’s performance, like reduced acceleration, trouble restarting once it has stalled and overall poor performance. It can also increase your emissions of harmful compounds like carbon monoxide.