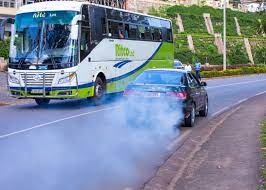 You might not have heard this; don’t know if there is an adage that goes with this, But there’s a lot you could learn from the back of your car about what’s going under the hood. The exhaust is essentially there to release the bi-products of fuel and air in an internal combustion engine.

Normally, an engine produces a faint white exhaust with droplets of water, which is a result of condensation and some inadequacies of the combustion process itself. However, you could see noticeable changes in the exhaust colors if the combustion process is not proceeding in proper order. In this article we’ll go over the three types of smoke the exhaust puts out and what each of them means for your car.

Black exhaust smoke is typically indicative of a rich condition. That is, the engine is burning too much fuel for the amount of air it is taking in. When the engine is dumped with excessive fuel, it is not possible to combust the entire mixture in an optimal way, which inevitably leads to the extra load being passed down and out. When a load of processing fuel becomes too much, the engine resorts to passing the rest to the exhaust, which now has to deal with the unburnt mixture. This results in excessive unprocessed hydrocarbons escaping out of the tailpipe.

The amount of black smoke from the exhaust can vary greatly depending on what has caused the condition. A rich fuel mixture can be a result of a lot of different things and the degree to which each problem may cause the ratio to be off can also be hard to determine. Common reasons for a rich fuel mixture include – Dirty air filter, Faulty Maf sensor, problems in the fuel delivery mechanism.

It is not always that you may be able to sense a rich condition. Something as slight as debris in the air filter can partially block the air supply which may not always signal alarming consequences. You may notice a slightly bad fuel economy, gas smell in the cabin, and maybe some dark smoke from the exhaust. Though, if not tended to, a rich or lean condition can worsen and often lead to various other engine problems.

Another troublesome color you may see your exhaust gasses to change into is a bluish-grey. This color is indicative specifically of an engine oil leak within the system. Usually, the cause of such an issue is either a broken head gasket, piston rings or a leaky PVC valve. If the head gasket is blown, you may not see clear blue smoke from the exhaust due to the concurrent mishmash of fluids in the engine. The head gasket holds together the channels through which every liquid in the system is circulated, preventing them from getting into the cylinders and causing problems. But if the head gasket is blown or has developed a crack where it seals the channel for the engine oil, it can lead to oil leakage in the combustion chamber. The addition of engine oil in the combustion reaction produces the distinct blue smoke we’re talking about.

If you constantly find your engine oil levels going down despite having periodically serviced, the reason for such a condition could be a leakage in engine oil. This can be extremely taxing on the engine as it would be running without properly optimized for friction plus it would have to deal with burning the extra engine oil being dumped in.

Thick white smoke from the exhaust points to a very specific problem in the combustion chamber,- an internal coolant leak. The diagnosis of such a problem can be traced to essentially three things, namely,  A leak in the PVC valve, broken head gasket or worn valve seals. Like engine oil, the coolant has similar symptoms and signs when disappearing in the engine. You might see the thermostat rising up, the reservoir running dry, and other such conditions when the engine is left without the primary element in its cooling mechanism.

The most telling early symptom of this problem is the disappearance of cooling without any leak. If the coolant disappears without any trace it is likely it is being combusted in the engine block. And very similar to engine oil, the coolant can take a toll to process inside the engine and cause long-term damage to the internals of the engine.

How To Fix Exhaust Smoke?

Exhaust smokes can provide you with useful information on what exactly is going on inside the combustion chamber. The three colors discussed above indicate very specific problems in the engine and can be actually helpful in diagnosing problems early in your car. However, depending upon the type of smoke coming from your tailpipe, its causes can be many and varied. Which is why, the process of diagnosing these issues can be harder by yourself.

Get Detailed Diagnostics At VehiclecCare

For a detailed, thorough yet convenient and hassle-free inspection of your problems, get your car checked by us at VehicleCare. Exhaust smoke can mean a host of different things as noted above and not having your vehicle properly diagnosed can lead to more problems down the line. With state-of-the-art equipment and techniques, we employ the best methods to offer you the best and cost-effective solution for your car problem.